Berks or Berkshire (written Barkshire by Leland, and so pronounced in the locality), an inland county within the basin of the Thames. It is bounded on the N by Gloucester, Oxford, and Bucks, from all of which it is separated by the Thames, on the SE by Surrey, on the SW by Herts1, and on the W by Wilts. Its outline is irregular, and has been compared by some to that of a lute, by others to that of a slipper or a sandal. Its boundary, in a tortuous line along the N, from its most westerly extremity to its most easterly one, is the Thames. Its greatest length is about 48 miles, its greatest breadth about 29 miles, its mean breadth about 14 miles, its circuit about 165 miles, its area 462,224 acres, Its surface presents few abrupt or bold elevations. A series of Downs, a continuation of those in the N of Wilts, goes eastward, across its broadest part, and attains at White Horse Hill an altitude of 893 feet above the level of the sea. Most of the other tracts are distinguished by soft, gentle, luxuriant beauty. The chief streams are the Thames, the Kennet, the Lodden, the Lambourn, and the Ock. A small tract on the SE border, round Finchampstead and Sunninghill, consists of Bracklesham and Bagshot beds. A large tract across all the S, from the western border in the southern vicinity of Hungerford, past Newbury and Wokingham, to the eastern boundary at Old Windsor, consists of London clay and plastic clay. A broad tract all across, from the western border at Hungerford and the neighbourhood of Ashbury to the Thames, from the vicinity of Reading to Moulsford, consists of chalk. A considerable belt N of this, and all across, consists of upper greensand and gault. A narrow belt, farther N, consists of lower greensand. Two belts still farther N, the second lying all along the Isis or Thames to a point below the vicinity of Kennington, consist of oolite, the former of the upper series, the latter of the middle. The minerals and the fossils do not possess much interest, and mineral waters are scarce. Peat exists in considerable quantity on the low grounds of the Kennet, and in small quantity on some high lands of the Thames, and is extensively burned for its ashes, which form a valuable manure for clover.

The soils are exceedingly various, ranging from strong fat loam to a mixture of sharp sand and peat. The vale of the White Horse is the most fertile tract, and the vale of the Kennet vies with it, and perhaps is better cultivated. The state of agriculture and the condition of the former are middle rate. Wheat, oats, barley, turnips, and beans are the chief crops grown; but buckwheat, vetches, pease, potatoes, rape, carrots, hops, flax, and artificial grasses also are cultivated. Much land on the Thames and around Faringdon is devoted to the dairy. The sheep walks were formerly depastured by a native breed called the Notts, but these are now almost superseded by other breeds. The cattle are mostly of the long horn or common country breed. The draught horses are good and strong, but not tall. Hogs and poultry are numerous in the dairy districts, and from the proximity of London yield much profit to the farmer. The native breed of hogs is highly esteemed, and a mixed breed at Sunninghill Park is pre-eminently good.

Woodlands prevail much in the E, and get prominence there from Windsor Forest. Oak and beech are the chief trees in the woods. The beech trees are largely turned to account for the manufacture of chairs and numerous turned articles. Osiers are grown in watery places for baskets, and alders for rake handles and other uses. Fine trout and other fish abound in most of the streams, the trout of the Kennet being especially esteemed by anglers.

Manufactures are of small note. Woollen cloth, sacking, and sail-cloth were formerly made in large quantity, but have ceased to be of any consequence. The clothing trade, which formerly sustained numerous market towns, since dwindled to mere villages, has been revived at Abingdon. Paper is made in the vale of the Kennet. Much malt is manufactured for the London market, and the Kennet and Windsor ales are in repute. At Reading there are the world-famed biscuit works of Messrs Huntly & Palmer, the Reading ironworks, and the celebrated seed grounds of Messrs Button. The Thames is navigable along all the N boundary, and the Kennet by means of cuts for 30 miles, from Reading to Hungerford; the Berks and Wilts Canal goes across all the N, from the vicinity of Abingdon up the vale of the White Horse, and the Kennet and Avon Canal completes the navigation of the Kennet from Newbury to Hungertord. The Great Western railway enters by Slough (Bucks), with a branch through Eton to Windsor, thence to Maidenhead, sends off a branch thence into Bucks towards High Wycombe, passes on to Twyford, sends off a branch thence across the Thames to Henley, passes on to Reading, is joined there by a line coming up from the London and South Western and South Eastern, which join at Wokingham, passes up the Thames to Didcot, sends off thence a branch to Oxford, with sub-branch to Abingdon, and another branch southward to Newbury, and goes away westward to Wilts in the vicinity of Shrivenham. A line goes southward from Reading to Basingstoke, another line goes westward from Reading to Hungerford, and branches go from the Great Western to Wallingford and Faringdon.

Berks is in the home military district, and in the Oxford judicial circuit. There were formerly jails at Abingdon and Reading, but the former was sold on the transference of the assizes to Reading. The prison at Reading was erected in 1833, is a castellated building of red brick, and has accommodation for 224 prisoners. Under the Local Government Act of 1888 Berkshire became an administrative county, governed by a County Council consisting of a chairman, 17 aldermen, and 50 councillors. The place of meeting is the Assize Courts, Reading. The administrative county includes the county borough of Reading, which contains three entire civil parishes, and the six municipal boroughs of Abingdon, Maidenhead, Newbury, Wallingford, New Windsor, and Wokingham, and has one court of quarter sessions and 12 petty sessional divisions. The boroughs of Abingdon, Maidenhead, Newbury, New Windsor, Reading, and Wallingford have separate commissions of the peace; Abingdon, Newbury, New Windsor, and Reading having in addition separate courts of quarter sessions. Formerly three members were returned to Parliament for the undivided county, but by the Redistribution of Seats Act, 1885, it was divided into the northern, southern, and eastern divisions, with one member for each. In addition, one member is returned, by the borough of Reading, and the county contains parts of the parliamentary boroughs of New Windsor and Oxford. The poor-law unions of the county are Abingdon, Bradfield, Cookham, Easthampstead, Faring-don, Hungerford, Newbury, Beading, Wallingford, Wantage, Windsor, and Wokingham. The chief hospital of the county is the Royal Berkshire Hospital at Reading, opened in 1839, and greatly enlarged in 1882. The County Lunatic Asylum stands on the Wallingford road, three-quarters of a mile from Moulstord station, and in the parish of Cholsey. It is a fine building of red brick, was opened in 1870, and its grounds cover an area of 80 acres. The Broadmoor Criminal Lunatic Asylum stands on an elevated site near Wokingham, partly sheltered by pine woods. It was opened in 1863, and has accommodation for 563 inmates. The population of the county was (1801)110,480,(1821)132,639,(1841) 161,759, (1861) 176,256, (1881) 218,363, (1891) 238,709.

The territory now forming Berks was inhabited in the ancient British times by two tribes, whom the Roman invaders called Bibroci and Attrebatii. It became part of the Roman Britannia Prima. It next formed part of the Saxon kingdom of Wessex, and was then called Berrocscire. It was the scene of frequent conflicts with the Danes, and it afterwards figured in the struggle between the Empress Matilda and Stephen, in the quarrels between King John and his nobles, and in the war between Charles I. and his Parliament, British, Roman, and Saxon remains, chiefly barrows and camps, occur at Little Coxwell, Sinodun, Letcombe, Uffingham, the White Horse Hill, Ashbury, Ashdown, Speen, Binfield, Castleacre, Hardwell, and Wantage. Icknield Street traverses the county south-westward from Streatley to the south-western vicinity of Newbury, and sends off branches along the hills. An ancient road went from Speen to Silchester; another, called the Devil's Causeway, went by Old Windsor to Staines, and some others have left traces. Ruined castles occur at Faringdon, Donnington, and Wallingford, and ancient mansions at Aldermaston, Appleton, Ockholt, Cumnor, and Wytham. Abbeys stood at Abingdon, Bisham, Bradfield, Faringdon, and Reading; priories at Bisham, Cholsey, Harley, Faringdon, Reading, Sandleford, and Wallingford; preceptories at Bisham and Brimpton; and colleges at Shottesbrook, Wallingford, and Windsor. Interesting ancient churches, Norman or otherwise, occur at Avington, Bucklebury, Cumnor, Englefield, Shottesbrook, Uffington, and Welford. Berkshire gives the title of Earl to the Earl of Suffolk.

The Chapman code for Berkshire is BRK.
Chapman codes are used in genealogy as a short data code for administrative areas, such as county and country names.

We have a database containing transcripts of marriage records for some parishes in Berkshire.

Transcript of the description from Pigot & Co. directory of Berkshire, 1844

The Historical Directories web site have a number of directories relating to Berkshire online for the period 1833-1915, including:
Kelly's, Pigot, Slater, Harrod

We have transcribed the entry for Berkshire from the following:

A listing of the Hundreds and Liberties in Berkshire, with the parishes contained in them.

The Return of Owners of Land in 1873 for Berkshire is available to browse.

Old map of Berkshire circa 1895 (Gazetteer of England and Wales)

A listing of the Poor Law Unions in Berkshire, with the parishes contained in them. 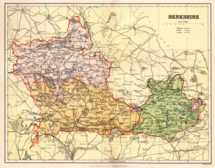