Swimbridge, a parish, with a village and two hamlets, in Devonshire, with a station on the G.W.R., 200 miles from London, and 4½ ESE of Barnstaple. It has a post, money order, and telegraph office under Barnstaple. Acreage, 7146; population, 1171. There are several handsome residences in the neighbourhood. The Duke of Bedford is lord of the manor. The living is a vicarage in the diocese of Exeter; net value, £270 with residence. Patron, the Bishop of Exeter. The church is Later English, and has a tower and spire. There are Baptist and Wesleyan chapels and a church mission-room.

The parish register of baptisms and marriages dates from the year 1563; burials, 1562. 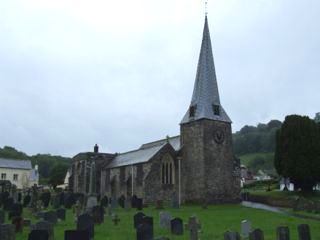 The church of St. James is a fine building of stone in the Late Perpendicnlar style, consisting of chancel with aisles, north transept, which retains an ancient piscina, nave, north aisle, south porch and a western tower of the Decorated period, with spire, and containing a clock and 6 bells, all cast in 1753 by William Evans, of Chepstow: on the south side of the chancel is St. Bridget's chantry chapel, built by the Mules family, of Ernesborough: the bosses of the roof are adorned with emblazoned shields of the D'Abernon, Denys, Cary, Mules and Orchard families: the north aisle was built bv Sir John Moeles, or Mules, whose family, a younger branch of the Lords Moels, were for some generations seated at Ernesborough, now called Irishborough, in this parish: there are several monuments and a memorial on copper to the Chichester and other families, and a stone pulpit, with figures of the Evangelists: the oak rood screen, restored under the direction of the late Mr. J. L. Pearson R.A., F.S.A. is remarkable for the marvellous delicacy and beauty of its carving: the font is inclosed within a screen of carved oak and there is a reredos of alabaster and marble, erected in 1894 as a memorial to the late John Smyth esq.: the church was restored in 1880, at a cost of £4,000, and has 250 sittings.

We have transcribed the entry for Swimbridge from the following:

Online maps of Swimbridge are available from a number of sites: