Stoke Rivers, a parish, with a village, in Devonshire, 5 miles E by N of Barnstaple station on the G.W.R. Post town, Barnstaple. Acreage, 2445; population, 199. There are remains of a large Roman camp. The living is a rectory in the diocese of Exeter; net value, £180 with residence. The church is good, and has been restored.

The parish register dates from the year 1553. 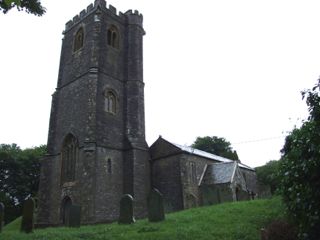 The church of St. Bartholomew is an ancient building of stone, in the Perpendicular style, consisting of chancel, nave, south aisle, south porch and an embattled western tower containing 5 bells, cast in 1784: the tower was restored in 1884-5: the screen, bench-ends and other fine work of carved oak were removed some time since; the greater part was bought by Earl Fortescue, and taken to his mansion at Wear Gifford, but some of it was erected in the church there: the church was reseated and restored in 1905, and affords 116 sittings.

We have transcribed the entry for Stoke Rivers from the following:

Online maps of Stoke Rivers are available from a number of sites: