Stoke Gabriel, a parish, with a village and two hamlets, in Devonshire, on the river Dart, 4 miles SE of Totnes station, and 3½ from Paignton station on the G.W.R. It has a post office under Totnes; money order and telegraph office, Totnes. Acreage, 2366; population, 618. There is a parish council consisting of nine members. Waddeton Court, Sandridge, and Maisonette are the chief residences. The living is a vicarage in the diocese of Exeter; net value, £280 with residence. Patron, the Bishop of Exeter. The church is chiefly Decorated English, and has been restored. There is a Baptist chapel. John Davis the celebrated navigator was a native.

The register dates from the year 1539. 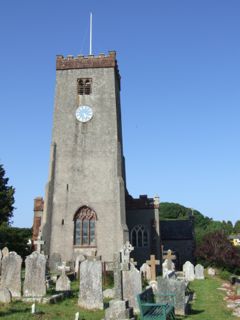 The church of St. Gabriel is an ancient building of stone, in the Perpendicular style, consisting of chancel, nave, aisles, south porch and an embattled western tower containing 6 bells; the first two were cast in 1845, the third and fifth in 1674; the fourth dates from 1648 and the tenor from 1827; in 1889 the entire peal was tuned and rehung: the chancel retains a piscina: the east window and three others are stained: in the south aisle is a brass to members of the Hunt family, and there are some remains of oak screens: the church was repaired and re-seated in 1855, and again restored in 1879, at a cost of £1,800, the greater part of which was given by Mrs. Olive Holdsworth Hunt: the chancel was reseated and refitted in 1899: there are 300 sittings: in the churchyard is a very fine yew tree.

We have transcribed the entry for Stoke Gabriel from the following:

Online maps of Stoke Gabriel are available from a number of sites: