Stoke Fleming, a parish, with a village, in Devonshire, on the coast, 2 miles SW of Dartmouth station on the G.W.R. It has a post, money order, and telegraph office. Acreage, 2259; population of the civil parish, 664; of the ecclesiastical, 747. There is a parish council consisting of nine members. The manor belonged to the Flemings, and passed to the Mohuns, the Carews, the Southcotes, the Scales, and the Nethertons. The living is a rectory in the diocese of Exeter; gross value, £600 with residence. The church is ancient. There is a Congregational chapel.

The register dates from the year 1538. 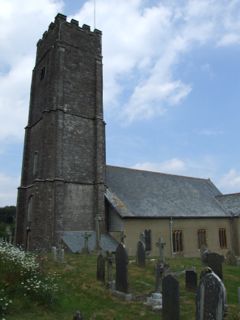 The church of St. Peter is an edifice of stone, in the Early English style, consisting of chancel, nave, aisles, north porch and a lofty embattled western tower containing a clock and 6 bells, all cast in 1777: in the nave is a brass with rich embattled canopy and effigies, to John Corp, ob. December 2, 1351, and his granddaughter Eleanor, ob. April 23rd, 1391; the epitaph is in Norman-French and Latin; there is also an inscription in English verse, with shield of arms, to Elias Newcomen, ob. 13th July, 1614, rector of this place, and great-grandfather of Thomas Newcomen, of Dartmouth, the inventor of the steam engine: in the tower is the recumbent effigy of a lady, in the costume of the latter part of the 13th century and holding a book in the left hand; it is supposed to represent Eleanor (Mohun), wife of Sir John Carew: the very handsome brass chandelier in the chancel was the gift of Sir Thomas Freake bart. of Warfleet, Dartmouth: there are 350 sittings: the whole fabric was repaired and reseated in 1871, under the direction of J. P. St. Aubyn esq. architect.

We have transcribed the entry for Stoke Fleming from the following:

Online maps of Stoke Fleming are available from a number of sites: