South Molton, a very ancient market-town, municipal borough, and parish, in Devonshire. The town stands on rising ground on the right bank of the river Mole, with a station on the G.W.R.,192 miles from London and 11½ ESE of Barnstaple. It has a post, money order, and telegraph office. Acreage of parish, 6454; population, 3126. The name is taken from the Mole, but was anciently written Sud (in Saxon, South) Molton. The manor, prior to the Norman Conquest, belonged to the Crown; was held in the time of Edward I. by William Lord Martyn, under the Earl of Gloucester, by the service of providing a man with a bow and three arrows to attend the Earl while hunting in the neighbourhood; passed to Lord Audleigh, and reverted in the time of Richard II. to the Crown, and so continued till the reign of Queen Elizabeth, who granted the same to Sir John Packington, Knight, a servant of hers. Since then the Burgesses bought the borough, being now lords of itself in fee farm. The lord of the manor had formerly the power of inflicting capital punishment. The town sent members to Parliament in the 30th Ed. I., 1302. It was incorporated in 1590, got a renewal of charter in 1684, and under the Municipal Reform Act is governed by a mayor, recorder, town clerk, 4 aldermen, and 12 councillors, with two sergeants at mace. It consists of several streets, with well-paved carriage ways and flagged footpaths. Several of the footpaths in the streets and through the churchyard were much improved in the year 1894 by the South Molton municipal charity trustees at an outlay of about £500, out of funds in their hands belonging to Hugh Squiers charity. It also enjoys a plentiful supply of water from public conduits, and presents a clean and pleasant appearance. A one-arched bridge crosses the river, and was erected after the destruction of an old one by a flood in 1841. The guildhall stands in the Square, is a commodious building, and is used for municipal business and for petty sessions and county courts, &c. The market-hall was built in 1810, and the upper part of it became appropriated to the mechanics' institute, established in 1856, and included a reading-room and a library. This building was in the year 1888 converted into a spacious and commodious post and telegraph office, and the library, which is a large one, has been removed to the premises in East Street, some years ago used as the borough police station. A large block of buildings, comprising market-house, assembly rooms, and other apartments, was erected in 1864. A commodious police station and barracks were erected in South Street in 1895. The Freemasons' Hall, in New Road, was built in 1846. The parish church is Later English, consists of nave, aisles, and chancel, with massive pinnacled tower; was restored in 1865 at a cost of about £3000, and contains a richly carved stone pulpit and many handsome monuments. There are Congregational, Baptist, Wesleyan, Bible Christian, and Plymouth Brethren chapels, and a mission hall. A free school was founded by Mr. Hugh Squier, has an endowed income, and had Judge Buller for a pupil. A Bluecoat school was founded in 1711, but has long since been done away with. These schools have been united with the national schools under one governing body. The town has three banks and two hotels, and figured as a great stage on the main road from Somerset to Barnstaple in the old coaching days. The market is held on Saturdays and Thursdays; cattle markets are held the first Thursday in every month; and fairs are held on the Wednesday before 22 June and the Wednesday after 26 Aug. There is a tannery and a shirt and collar factory in the town. The living is a vicarage in the diocese of Exeter; gross value, £260 with residence. Patrons, the Dean and Canons of Windsor. A private chapel, rebuilt in 1776, is at Clappery Mill, but this is now disused.

The parish register dates from the year 1601. 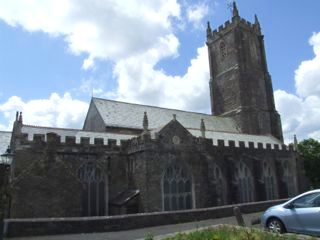 The church of St. Mary Magdalene is an edifice of stone in the Perpendicular style, enlarged in 1829 and restored and repaired in the year 1865, at a cost of £3,300, when it was new-roofed and reseated: it now consists of chancel with aisles, nave, aisles, shallow south transept, south porch, and an embattled, western tower, with pinnacles, containing a clock and 8 bells; there are fifteen stained windows, some good monuments and a very fine carved stone pulpit: the north aisle of the transept retains two piscinae: a new organ was erected in 1900, choir stalls added, and the chancel paved with marble, at a total cost of £1,139: adjoining the tower is a stone screen with marble columns, erected in 1903 as a memorial to Eliza Melhuish; the carved wooden doors of the screen were presented by the late Mr. John Morris, formerly of this parish: there are 800 sittings.

We have transcribed the entry for South Molton from the following:

Online maps of South Molton are available from a number of sites: