Sherwell, a village and a parish in Devonshire. The village stands 4½ miles NE by N of Barnstaple stations on the G.W.R. and L. & S.W.R., and has a post office under Barnstaple; money order office, Pilton; telegraph office, Barnstaple. Acreage, 4759; population, 370. There is a parish council consisting of seven members. The manor and most of the land, with Youlston Park, belong to the Chichester family. The living is a rectory in the diocese of Exeter; gross value, £561 with residence. The church is good.

The parish register dates from the year 1687. 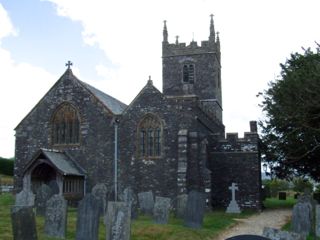 The church of St. Peter is a building of stone in the Perpendicular style, consisting of chancel, nave, north transept, south aisle, south porch and a low embattled tower on the south side, with pinnacles containing 6 bells, all cast by William Evans, of Chepstow, in 1733: the chancel retains a piscina, and in the north wall is the recumbent effigy of a lady in a long straight-flowing dress and mantle and wearing a square ornamented head-dress; the figure is assumed to represent Blanche, daughter of William Bourchier, Lord Fitzwarren, and wife of Bartholomew St. Leger, ob. 4th January, 1483; the fine and ancient oak screen dividing the chancel from the nave, which existed in 1847, has now disappeared: the font is possibly Norman: the church has been restored since 1873 at a cost of £1,336 and affords 200 sittings.

We have transcribed the entry for Sherwell from the following:

Online maps of Sherwell are available from a number of sites: