Sandford, a village and a parish in Devonshire. The village stands near the river Creedy, 2½ miles NNW of Crediton station on the L. & S.W.R., and has fairs on the third Monday of March and the last Monday of July. It has a post and money order office under Crediton; telegraph office, Crediton. The parish, entirely agricultural, contains also the hamlets of East Sandford, West Sandford, and New Buildings. Acreage, 7820; population, 1347. There is a parish council consisting of eleven members. The manor, with Creedy Park, belongs to the Davie family. Creedy Park, Dowrich House, and Park House are chief residences. The living is a vicarage in the diocese of Exeter; gross value, £210 with residence. The church is ancient, has been restored and enlarged, and contains some memorial windows to the Davie family. There is a Congregational chapel. Ezekiel Hopkins (1633-90), Bishop of Raphoe and Derry, author of "Exposition of the Decalogue," was a native.

The parish register dates from the year 1603. 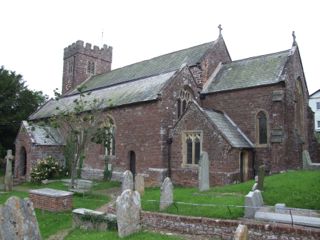 The church of St. Swithun is an ancient edifice of stone, in the Gothic style, consisting of chancel, nave, aisles, south porch and an embattled western tower containing a clock and 5 bells, all cast by William Evans, in 1748: the bells were refitted and rehung in a solid oak frame, and the tower strengthened with beams of oak in 1900, at a cost of £130: there is a monument of the 17th century to a member of the Davie family, and a very curious brass to Mary Carew, only sister of George, first and only Earl of Totnes, and widow of Walter Dowrich; she died September 10, 1604: the upper portion of this brass is in three divisions, representing an arcade; in the centre on an altar-tomb is a recumbent effigy of the deceased, and on the other divisions are kneeling effigies of four daughters, and there are five impaled shields and an inscription: the east window is a memorial to Sir Humphrey Phineas Davie bart. d. January 12th, 1846, when the title became extinct in this line: the carved oak pulpit, erected in 1878 as a memorial, is by Hems, of Exeter: in 1886 and 1890 memorial windows to Gen. Sir Henry Robert Ferguson-Davie bart. M.P. d. 30 November, 1885; Frances Juliana, his wife, d. April, 1882, and to Lady Edwina Augusta (Williams), wife of the late Sir John Ferguson-Davie, 2nd bart.; she died 15 Aug. 1889: there is a brass to the memory of the late Sir John Davie Ferguson-Davie, 2nd bart. erected by Sir William Augustus Ferguson-Davie bart. d. 1907: the church was restored and enlarged in 1847-8, and affords sitting for 577 persons.

We have transcribed the entry for Sandford from the following:

Online maps of Sandford are available from a number of sites: