Romansleigh (popularly Rumsleigh), a parish with a village, in Devonshire, 4 miles SSE of South Molton, and 6½ E by N of South Molton Road station on the L. & S.W.R. Post town, South Molton, North Devon. Acreage, 2502; population, 165. The manor belongs to the Acland family. Beacon Hill rises to an altitude of 900 feet above sea-level. The Roman road from Stratton to the vicinity of Tannton goes along the parochial boundary, and is here called Romansleigh Ridge. The living is a rectory in the diocese of Exeter; net value, £140 with residence. The church was rebuilt in 1867 and the tower in 1887, when three new bells were added, making a peal of six bells. A chalybeate spring is on its N side, and remains of an ancient cross are in the churchyard.

The parish register dates from the year 1539. 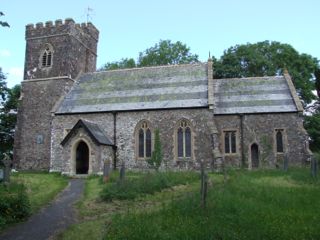 The church of St. Rumon is a building of stone in the Perpendicular style, consisting of chancel, nave, south porch, organ chamber and an embattled western tower containing 6 bells: the chancel contains two memorial windows, and the remains of a screen were existing here in 1822: the church was rebuilt in 1868 from designs by E. Ashworth esq. architect, of Exeter, and restored in 1885-7, when the tower was built: new chancel seats were erected in 1896, as a memorial to the Rev. Richard White Atkins M.A. rector 1884-95: in the churchyard are the remains of an old stone cross, and on the north side of the church is St. Rumon's well.

We have transcribed the entry for Romansleigh from the following:

Online maps of Romansleigh are available from a number of sites: