Parracombe, a village and a parish in Devonshire. The village stands 2½ miles SW of the boundary with Somerset, 4½ SW of Lynton, and 12 NE of Barnstaple station on the G.W.R. and L. & S.W.R. It was anciently called Per-combe or Peder-combe, and has a post, money order, and telegraph office under Barnstaple. Acreage of parish, 4451; population, 316. There is a parish council consisting of seven members. The manor belonged in the time of the Confessor to Bristwold, went at the Norman Conquest to one of the Conqueror's captains, passed afterwards to the Traceys and the Fitz-Martyns, and belonged to the St Albyns from 1310 till 1862. Middleton belonged in the time of Henry III. to Sir H. Bernefield, passed to the Westons and to the Earls of Devonshire, and belongs now to the Dovell family. Kowley belonged for ages to the Lock family, passed to the Roaches, and belongs now to the Pyke family. An ancient circular earthwork, called Holwell Castle, is near the village. The living is a rectory in the diocese of Exeter; net value, £260 with residence. The present church was erected in 1878, and is a stone building in the Early English style. The old church of St Helen still exists, and is used occasionally for services in summer. There is a Wesleyan chapel and one for the Brethren. A cattle fair is held on 18 August.

We have transcribed the following census returns for Parracombe:

Christ Church, erected in 1878, at a cost of £4,000, is an edifice of stone in the Early English style, consisting of chancel, nave, north aisle, south porch and an embattled western tower, with pinnacles, containing a clock and 6 bells, two of which are ancient bells removed from the old church: the stained east window is a memorial to the Rev. John Pyke, a former rector; and there is another window in the chancel to Richard Dovell esq. of Middleton. 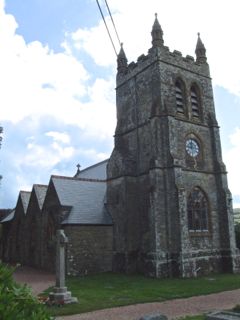 The old church of St. Petrock, an ancient structure in the Norman and Early English styles, was restored in 1892, and again in 1908 after being struck by lightning: it is now used occasionally in the summer: it retains an ancient chancel screen.

We have transcribed the entry for Parracombe from the following:

Online maps of Parracombe are available from a number of sites: