Northam, a village and a parish in Devonshire. The village stands near the river Torridge, 1½ mile SSW of the joint influx of the Torridge and the Taw to Bideford Bay, 1 from Instow station on the L. & S.W.R., and 1¾ N by W of Bideford. It has a post and money order office under Bideford; telegraph office, Bideford. The parish contains also the hamlet of Northam Ridge, and the village and chapelry of Appledore. Acreage, 4190; population of the civil parish, 5043; of the ecclesiastical, 2594. For parish council purposes it is formed into an urban district, and is divided into two wards-Northam and Appledore-each sending six members to the district council. The parish has great attractions as a place of residence, and contains numerous gentlemen's seats and villas. Northam Burrows is an alluvial common of about 700 acres, protected from the waves by a remarkable barrier called the Pebble Ridge, about 1½ mile long, 50 feet wide, and 20 feet high, and consisting of millstone-grit pebbles from 6 to 24 inches in diameter. A new watering-place, founded about 1867 to the westward of the Burrows and adjoining the sea, took the name of Westward Ho from the circumstance that the scene of Charles Kingsley's well-known work of that name is laid chiefly in the parish; it has very good accommodation for visitors. A submarine forest, in which flint instruments and reindeer bones have been found, is on the shore near the hotel; excellent sections of a raised beach also are near; and zoophytes abound in both the rocks and the pools. The Danes, under Hubba, landed here in the time of King Alfred, and suffered a disastrous repulse. The living is a vicarage in the diocese of Exeter, with Westward Ho annexed; net value, £300 with residence. Patrons, the Dean and Canons of Windsor. The church is Early Decorated and Later English; comprises nave, N aisle, S transept, chancel, chancel aisle, and S porch; has a W tower of three stages, battlemented, and 96 feet high; and has been well restored. The vicarage of Appledore is a separate benefice. There are in the several parts of the parish two Congregational chapels, one Baptist, three Methodist, one Brethren, and one Bethel. A pleasure fair is held annually on Whit-Monday. 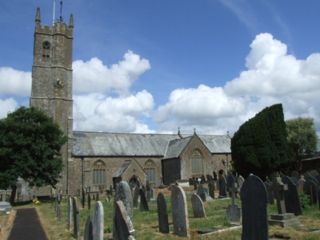 The church of St. Margaret is a very fine building of stone in the Decorated or Early Perpendicular style, completely restored between 1849 and 1865, and consists of chancel and nave, each with a north aisle, south traasept, south porch and an embattled western tower with pinnacles and containing a clock and 6 bells, all cast in 1770 by Thomas Bilbie, of Collumpton: there are several fine modern stained windows: the church affords 600 sittings.

We have transcribed the entry for Northam from the following:

Online maps of Northam are available from a number of sites: