Morthoe, a village and a parish in Devonshire. The village stands on the coast of Morte Bay, near Morte Point, 4½ miles WSW of Ilfracombe, with a station on the L. & S.W.R., 223 miles from London. It is picturesquely situated, and has a post, money order, and telegraph office. The parish contains also the hamlets of Eastacott, Horsborough, and Shesborough. Acreage, 3799; population of the civil parish, 678; of the ecclesiastical, 625. The Woollacombe Sands extend about 2 miles, and form a pleasant promenade. The living is a vicarage in the diocese of Exeter; value, £180. Patrons, the Dean and Chapter of Exeter. The church is old, with a tower, has been restored, and contains an ornate tomb of Sir William de Tracy, who lived here in retirement after participating in the murder of Thomas a Becket. There is a Wesleyan chapel. Bull Point Lighthouse is situated about 1 mile from the village, and was built in 1879; it has a fixed red light to mark the position of Morte Stone, a dangerous rock off the point, and a powerful foghorn.

The register dates from the year 1721. 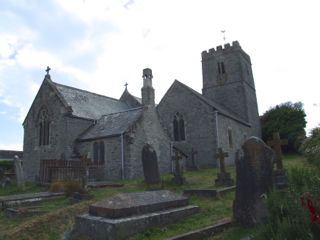 The church of St. Mary is an ancient edifice of stone in the Early English and Perpendicular styles, consisting of chancel, nave, south transept, north aisle, south porch and an embattled western tower containing a clock, placed in 1887, and 6 bells: the oldest portions of the existing structure are the nave and chancel; the latter, built in the 13th century, has a Transitional chancel arch; the north aisle dates from the 15th century, or later; the tower, of the 14th century, has a north doorway, possibly Norman: the oak seats, curiously carved with shields and initial letters, were restored in 1857: in the south transept is a slab, supposed to mark the burial place of the founder, and here also is an altar-tomb with the incised effigy of a priest, vested, and holding a chalice, and on the sides figures of St. Catherine and St. Mary Magdalene, and three shields of arms, showing the alliances of the Tracy family; the upper slab also bears, in Norman-French, an invocatory inscription for Sir William Tracy, rector of this parish, ob. 1321, who founded a chantry in the church, and dedicated it to these saints; the north side of the tomb is adorned with tracery or the Early Decorated period, and the west end bears a representation of the Crucifixion: on a tombstone near the doorway of the church the name of Tracy again appears: in the west; wall of the south transept is a fine sculptured cenotaph, erected in 1890 from the design of Mr. A. Lauder, architect, of Barnstaple, as a memorial to the late Miss Heddon, and executed by Mr. Harry Hems, of Exeter: in the south transept is a curious angle window, now filled with stained glass; the east window, side chancel windows and three in the north aisle are stained: on the west side of the chancel arch is a mosaic with figures of angels to the memory of the late Mrs. G. B. Longstaff, who died in 1903, from designs by Mr. Selwyn Image: there is also a brass to Ann Tucker, caretaker of this church for 27 years: the altar frontals were worked by the late Mrs. G. B. Longstaff, from designs by Mr. Selwyn Image: the church was restored in 1859 at the expense of the Rev. John Derby Ness B.A. rector, 1830-84, in memory of his eldest son, and has 200 sittings: in the churchyard is a lych-gate, built in 1886, and designed by Mr. Edward Burgess. By Order in Council, dated December, 1896, burials were discontinued in the churchyard from May 31, 1897.

We have transcribed the entry for Morthoe from the following: