Moreleigh or Morley, a village and a parish in Devonshire. The village stands 2½ miles E of the river Avon, and 5½ SSW of Totnes station on the G.W.R.; was once a market-town; and gives the title of Earl to the family of Parker. Post town, Totnes. Acreage of the civil parish, 1186; population, 102; of the ecclesiastical, 113. Stanborough Fort, an ancient strength which gave name to the hundred of Stanborough, stood here. The parish is a resort of sportsmen. The living is a rectory in the diocese of Exeter; gross value, £145 with residence. The church is Early English, has a partially developed fresco on S wall, is of the time of Edward I., and was restored in 1877.

The register dates from the year 1695. 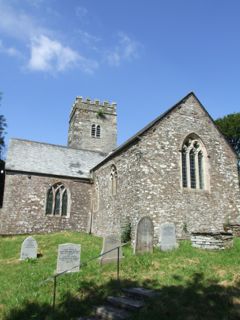 The church of All Saints is a building of stone in the Gothic style, consisting of chancel, nave, aisles, south porch and an embattled western tower containing 3 bells, with legends in Old English characters, the last two being invocations to S. Peter and S. Thomas: there is a fine old Norman font, and portions of a mural painting still exist: the church was restored in 1877, and is said to have been built by Sir Peter Fitzacre, who having killed the parson of Woodleigh, in a quarrel, was ordered by the Pope to build the present church as a penance: there are 70 sittings.

We have transcribed the entry for Moreleigh from the following:

Online maps of Moreleigh are available from a number of sites: