Okehampton, Monk, a village and a parish in Devonshire. The village stands on the river Okement, 2½ miles ENE of Hatherleigh station on the L. & S.W.R., and 6½ N of Okehampton. It has a bridge over the Okement, built in 1854, and is a picturesque place. Post town, Winkleigh; money order and telegraph office, Statherleigh. The parish contains also the hamlet of Burrow. Acreage, 1145; population of the civil parish, 191; of the ecclesiastical, 201. A grange to Tavistock Abbey was here, and gave rise to the prefix name Monk. The living is a rectory in the diocese of Exeter; net value, £130 with residence. Patron, the Earl of Iddesleigh. The church was partly rebuilt about 1850, has been restored, and consists of nave, aisles, and chancel, with a tower.

The parish register dates from the year 1653. 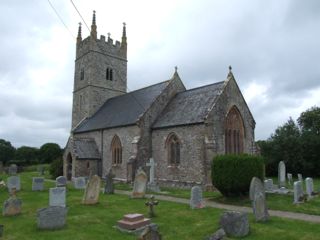 The church of All Saints is an edifice of stone in the Perpendicular style, consisting of chancel, nave, vestry, south porch, and an embattled western tower with pinnacles containing 4 bells: in the church is a memorial to Mr. Robert Rolle, d. 1735: the east window, shown in the Great Exhibition of 1851, was presented by the first Earl of Iddesleigh, and there are several others, including a memorial window to Mrs. Ruse, wife of a former rector, and one presented by the late Dr. Merriman, sometime head master of Surrey County School, Cranley, near Guildford, in memory of William Northcote, nephew of the first Earl of Iddesleigh: the oak reredos, designed by Mr. R. Medley Fulford, architect, and executed by Mr. Harry Hems, of Exeter, was presented by the first Earl of Iddesleigh, in memory of his brother, the Rev. Moubray Northcote, a former rector: with the exception of the tower the whole church was rebuilt in 1855: there are 120 sittings. The churchyard is entered by a handsome lych-gate, erected in 1863 by the Rev. Moubray Northcote in memory of his children.

We have transcribed the entry for Monk Okehampton from the following: