Molland, a parish, with a scattered village, in Devonshire, near the boundary with Somerset, 6½ miles ENE of South Molton, with a station on the G.W.R. 188 miles from London. It has a post office under South Molton; money order office. North Molton; telegraph office, South Molton. Acreage, 6262; population of the civil parish, 532; of the ecclesiastical, 954. The manor belonged to the Bottreaux family, and is sometimes called Molland Bottreaux; it afterwards passed to the Hungerfords and the Courtenays, and belongs now to the Throckmorton family. West Molland, about a mile from the village, is a fine old mansion. About 1700 acres are moorland or common. An ancient camp is under Molland Down. The living is a vicarage, annexed to the vicarage of Knowstone, in the diocese of Exeter; value, £490 with residence. The church is Later English; comprises nave, N aisle, and chancel; and contains monuments of the Courtenays, and one of the Rev. D. Berry.

The parish register dates from the year 1541. 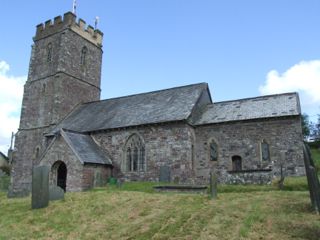 The church of St. Mary is an ancient edifice of stone in the Perpendicular style, consisting of chancel, nave, north aisle, south porch and an embattled western tower containing a clock and 4 bells: in 1894 memorial windows were erected to William Rossiter esq. and his wife, of South Molton: in the church is a memorial to the Rev. D. Berry B.D. sometime vicar of this parish and Knowstone, who was persecuted for his attachment to the cause of Charles I. and died in 1683, aged 45: there are also several interesting monuments to the Courtenay family: in 1902 the church was repaired, at a cost of £100, defrayed chiefly by subscription, and affords 220 sittings.

We have transcribed the entry for Molland from the following:

Online maps of Molland are available from a number of sites: