Meshaw, a parish, with a village, in Devonshire, 5 miles. SE by S of South Molton, and 9 NE of Eggesford station on the L. & S.W.R. It has a post and money order office under South Molton; telegraph office, Whiteridge. Acreage, 2095; population of the civil parish, 169; of the ecclesiastical, 158. The manor is divided. Meshaw House, or Barton, was anciently the seat of the Courtenays, and is now a farmhouse. The living is a rectory in the diocese of Exeter; gross value, £220 with residence. The church was rebuilt in 1838, retains the tower of a previous edifice of 1691, consists of nave and chancel, and contains a memorial window to T. H. Karslake, who fell at Sebastopol, and a monument of the Courtenays. There is a Bible Christian chapel.

The parish register dates from the year 1581. 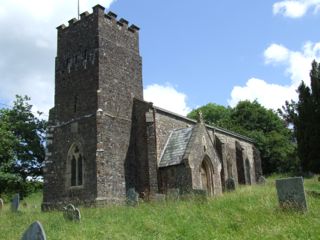 The church of St. John the Baptist, rebuilt in 1838, is an edifice of stone in the Early English style, consisting of chancel, nave, south porch and an embattled western tower containing 4 bells: in the church is a monument to James Courtenay esq. (dated 1683), in memory of whom the tower was rebuilt in 1691: the chancel has been enlarged and a stained east window inserted as a memorial to the Rev. William Heberden Karslake, rector from 1832, and prebendary of Exeter: the west window is a memorial to Mrs. W. H Karslake: the porch was built and the bells rehung at the expense of the late Miss Preston, lady of the manor, in 1879, and the church was restored during the period 1878-84, at a cost of £742; in 1906 it was further restored and new windows placed in the nave at a cost of £200: in 1909 a new organ was added at a cost of £200: there are 150 sittings.

We have transcribed the entry for Meshaw from the following:

Online maps of Meshaw are available from a number of sites: