Marwood, a village and a parish in Devonshire. The village stands 3½ miles NNW of Barnstaple station on the G.W.R. and L. & S.W.R., was known at Domesdayas Merewood, and has a post office under Barnstaple; money order and telegraph office, Pilton. The parish contains also the hamlets of Middle Marwood, Guineaford, Milltown, and Mudford. Acreage, 5375; population, 787. The soil shows signs of iron ore in large quantities, and there is a quarry of red sandstone. The living is a rectory in the diocese of Exeter; value, £400 with residence. Patron, St John's College, Cambridge. The church stands in a central position, has a good chancel of the 13th century, and a fine tower of later date, and contains a beautiful font, some carved open seats, and a handsome screen of the time of Henry VIII. There are Congregational, Wesleyan, and Plymouth Brethren chapels.

The parish register dates from the year 1602. 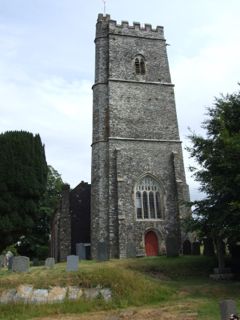 The church of St. Michael is an ancient building of stone in the Perpendicular style, consisting of chancel, nave, north aisle, south transept, south porch, and a western embattled tower containing 6 bells, cast in 1771: a richly carved screen, bearing the name of John Beapul, rector in the reign of Henry VIII. crosses the north aisle: the rood loft stairs exist, but the chancel screen disappeared about the turn of the 20th century: the chancel retains an Early English piscina: the carved stone font was presented by the late Mrs. Ann Tyrell, and the old one buried underneath to preserve it: the church plate includes flagon dated 1671, alms dish 1678, paten 1714, and a cup with cover of the time of Elizabeth: the church was restored in 1903, and affords 250 sittings. The churchyard was enlarged in 1878 by the addition of the parish bowling green.

We have transcribed the entry for Marwood from the following:

Online maps of Marwood are available from a number of sites: