Mariansleigh or Mary Ansleigh, a village and a parish in Devonshire. The village stands on an eminence near the river Mole, 3½ miles SSE of South Molton station on the G.W.R., and 7 ENE of South Molton Road station on the L. & S.W.R. The parish contains also the hamlets of Als-weir and Little Silver, and its post town and telegraph office is South Molton. Acreage, 2030; population, 201. A sawing and turning mill is at Little Silver. The living is a vicarage in the diocese of Exeter; value, £180 with residence. The church is ancient, and consists of nave, N aisle, and chancel, with a tower containing five bells. There is a Wesleyan chapel at Alsweir.

The parish register dates from the year 1727. 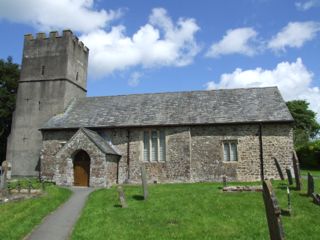 The church of St. Mary is an ancient building of stone in the Perpendicular style, consisting of chancel, nave, north aisle, south porch and an embattled western tower containing 5 bells, a new treble having been added in 1894, at a cost of £110, which included the cost of rehanging and adding a chiming apparatus: the font, constructed of granite, and probably of Norman date, has a square panelled basin: the east window is a memorial to W. T. Shackleton esq. d. 1882, and there is another, erected in 1900, to the late Mr. and Mrs. Hunt, formerly of this parish: in the window of the north aisle are some remains of ancient glass: the church affords 150 sittings.

We have transcribed the entry for Mariansleigh from the following:

Online maps of Mariansleigh are available from a number of sites: