Northamptonshire or Northampton, an inland county, bounded on the NE by Leicestershire and Rutland, on the N by Lincolnshire, on the E by Cambridgeshire, Huntingdonshire, and Bedfordshire, on the SE by Buckinghamshire, on the S and SW by Oxfordshire, and on the W by Oxfordshire and Warwickshire. Its outline is oblong and irregular, and extends from NE to SW. Its boundaries in some parts are traced by streams, but in general are artificial. Its greatest length is 70 miles, its greatest breadth is 25 miles, its circuit is about 215 miles, and its area is 641,992 acres. Population in 1801, 131,525; in 1821, 163,097; in 1841, 199,228; in 1861, 227,704; in 1881, 272,555; and in 1891, 302,183. The area of the administrative county includes part of tha civil parish of Fletton and part of the civil parish of Woodstone, in the ancient county of Huntingdon, but excludes part of the civil parishes of Warkwith, St Martin, Stamford Baron, and Little Bowden, which are included in the administrative counties of Oxford, Leicester and Lincoln respectively has an area of 639,541 acres, and had in 1891 a population of 299,508. The surface of the county is pleasantly diversified with moderate elevations; includes, near its W border, a part of the watershed between the eastern and western seas; rises nowhere higher than about 800 feet above sea-level; is all adapted either to tillage or to pasture; and presents, in general, a verdant aspect, with rich interspersions of wood and mansions. The loftiest heights are in the W, in the vicinity of Daventry; a range of tolerable elevation extends along the NE border, from Braybrooke to Wakerley; another range, of less marked character, nearly connects the hills around Daventry with the Braybrooke and Wakerley range; and several minor ranges occur in the SW. The chief streams are the Nen, the Welland, the Bedfordshire Ouse, the Warwickshire Avon, the Cherwell, and the Learn. About one-half of the entire area, including all the higher grounds, most of the tract along the Nen to the vicinity of Oundle, and some intervening tracts, consists of lias formations, variously sand, upper lias clay, marlstone, and lower lias clay and lime; most of the rest of the area consists of lower oolitic formations, variously corn-brash, forest marble, Bradford clay, Bath oolite, fuller's earth, and inferior oolite; and a tract of about 7000 acres in the extreme NE consists of alluvial matters, and is part of the Bedford Level or Great Fen. Good building stone is quarried at Barnack, Brackley, and Kingsthorpe; a sort of roofing-slate is quarried at Colleyweston ; and clay and lime abound. at Dunston, Kingsthorpe, and other places. Mineral or petrifying springs occur in Astrop, Higham Ferrers, Northampton, Baunds, Rothwell, Stanwick, and Wellingborough.

The soil in most parts is a stiff loam, in some localities cold and wet, in others friable and fertile, whitish to the S of Northampton, blackish to the S of Market Harborough, brownish or reddish on the NW border; but the soil of the fen-tract in the NE is a well-reclaimed, well-worked, and highly productive humus. Estates are large, farms average from 150 to 200 acres, and the farm-buildings are middle-rate. Wheat, barley, oats, rape, turnip, beans, pease, and grasses are the principal crops, and hemp is grown in the fens. Remains exist of Salcey, Whittlebury, and Rockingham forests, and produce oak, ash, beech, elm, and various kinds of underwood. The chief manufactures are shoes, boots, lace, malt, malt liquors, agricultural instruments, and paper.

The Nen is navigable for small craft up to Northampton; and the Welland, along the boundary with Lincolnshire, up to Stamford. The Grand Junction Canal traverses the county, about 25 miles south-east-by-southward, from Braunston to Cosgrove; makes a junction in the NW with the Oxford Canal; sends off a branch from Middleton to the Nen at Northampton; sends off another branch from Cosgrove, along the border, past Stony Stratford; and gives communication, through its connections, with the country around Birmingham, the Trent and the Mersey navigations, and the navigation of the Thames. The Grand Union Canal begins in the Grand Junction Canal near Daventry; runs northward into Leicestershire, to the Leicester Canal; and sends off a branch to Market Harborough. Most of the railways in the county have been noticed in the article on Northampton; another railway (part of the G.W. system) not noticed there runs along the SW verge from the vicinity of Banbury, past Kings Sutton and Aynho; another (part of the L. & N.W. system) goes across the SW wing from Banbury to Brackley, toward Buckingham; another (the main line of the L. & N.W.R.) comes in from the neighbourhood of Rugby, and goes south-east-by-eastward, past Watford, Weedon, Blisworth, and Ashton, toward Bletchley; another L. & N.W. line comes in from Leicester at Market Harborough, and goes south-south-eastward, past Kettering and Wellingborough, toward Bedford; another (belonging to the G.N.R.) runs curvingly across the NE wing, from Stamford to Peterborough; another of the G.N.R. lines comes in from York at Tallington, and goes south-eastward, chiefly alongside of the previous line, to Peterborough; another deflects from the last in the neighbourhood of Werrington, and goes north-eastward, past Peakirk into Lincolnshire, toward Boston; and another (belonging to the L. & N.W.R.) going from Rugby, past Market Harborough and Rockingham to Stamford, though running chiefly within Leicestershire and Rutland, impinges on parts of Northamptonshire, and serves for all its NW border.

The territory now forming Northamptonshire was inhabited by the ancient British Coritani; was included by the Romans in their province of Flavia Cæsariensis; formed part of the Saxon kingdom of Mercia; was known at Domesday as Northamtunescire; and then included what is now Rutland. Many remarkable events have occurred in it, and are noticed in our articles oil Northampton, Naseby, Edgcott, Fotheringay, Borough Hill, and other places where they happened. Ancient camps, variously British, Roman, Saxon, and Danish, are at Burnt Walls, Borough Hill, Arbury Banks, Castle Dykes, Irthlingborough, Raynesbury, Huntsborough, Hardingstone, Passenham, Berrymount, Guilsborough, Ringstead, Bound Hill near Lilbourne, and Castle Hill near Sulgrave. Roman stations were at Burnt Walls or Borough Hill, Chipping Warden, Towcester, Lilbourne, and Castor. The Roman Watling Street comes in on the S at Stony Stratford; goes north-north-westward past Towcester, Borough Hill, and Lilbourne; and proceeds thence beyond the county to an intersection of the Fosse Way at High Cross. The Port way deflected from Watling Street within the county and went to Backgrounds and Aynho. Ermine Street crosses the NE wing of the county from the neighbourhood of Castor to Stamford. Roman pavements have been found at Great Welden, Cotterstock, Thorpe, and Stanwick; and Roman coins and other Roman relics have been found in very many places. Old castles are or were at Fotheringay, Barnwell, Brackley, Northampton, Barton Seagrave, Rockingham, and other places. Queen Eleanor's crosses are at Delapré Abbey and Geddington, and others were at Braunston and Brackley. Abbeys, priories, friaries, nunneries, and monastic hospitals were numerous, and some of them have left considerable remains. An old cathedral is at Peterborough, and old churches with interesting features are at Barnack, Barnwell, Brackley, Brington, Brixworth, Castor, Earls Barton, Fotheringay, Glinton, Higham Ferrers, Northampton, Oundle, Spratton, Twywell, Wellingborough, and Whiston.

According to the Redistribution of Seats Act of 1885 the following are the Parliamentary Divisions of Northamptonshire, each of which returns one member to the House of Commons:—

The Chapman code for Northamptonshire is NTH.
Chapman codes are used in genealogy as a short data code for administrative areas, such as county and country names.

The Historical Directories web site have a number of directories relating to Northamptonshire online, including:
Kelly's, Pigot, Slater, etc.

We have transcribed the entry for Northamptonshire from the following:

A listing of the Hundreds and Liberties in Northamptonshire, with the parishes contained in them.

The Return of Owners of Land in 1873 for Northamptonshire is available to browse.

Old map of Northamptonshire circa 1895 (Gazetteer of England and Wales)

A listing of the Poor Law Unions in Northamptonshire, with the parishes contained in them. 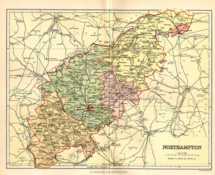