Landkey, a parish in Devonshire, near the river Taw, 2½ miles ESE of Barnstaple station on the G.W.R. It has a post office under Barnstaple; money order office, Barnstaple; telegraph office, Newport. Acreage, 3183; population, 647. The living is a vicarage in the diocese of Exeter; gross value, £240 with residence. Patron, the Bishop of Exeter. The church is old but good, and contains some effigies. There are a Wesleyan chapel, built in 1862, and a Bible Christian chapel, built in 1865.

The parish register dates from the year 1602. 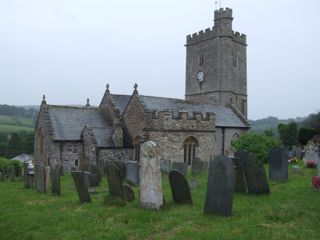 The church of St. Paul is a building of stone in the Perpendicular style, consisting of chancel, nave, north aisle, north and south chapels, south porch and an embattled western tower containing a clock and 6 bells, all cast in 1788 from a previous peal of four: in the church are recumbent effigies in stone of the 13th and 14th centuries, discovered during the restoration of the church in 1870; one having been built up in the wall where it was placed, and the other two concealed beneath the pews; two of these are figures of ladies, in wimples and flowing dresses, one wearing a long mantle; the other effigy is that of a cross-legged knight; they are conjectured to represent members of the Beaupell family, which had possessions here: there is also a monument with life-sized figures to Sir Arthur Acland, ob. 1610, and Elynor, his wife, ob. 1645: in the south chapel is a stained window and a hagioscope: the east window and one in the nave, placed in 1905, are also stained: the font is octagonal and probably of the 15th century: in 1904 the church was renovated and the bells rehung at a cost of about £130: there are 204 sittings.

We have transcribed the entry for Landkey from the following:

Online maps of Landkey are available from a number of sites: