Knowstone, a village and a parish in Devonshire. The village stands on an affluent of the river Mole, 3 miles from the boundary with Somerset, 8 E by S of South Molton, and 3½ from East Anstey station on the G.W.R. It has a post office under South Molton; money order and telegraph office, South Molton. The parish contains also the hamlets of East Knowstone and Roachill. Acreage, 5144; population of the civil parish, 422; of the ecclesiastical, 954. The manor belongs to the Throckmorton family. Wadham was once the seat of the Courtenays, and is now a farmhouse. The living is a vicarage, united with the vicarage of Molland, in the diocese of Exeter; value, £490 with residence. The church is ancient, consists of nave, N aisle, and chancel, with a tower, and contains monuments of the Cuime and Shapcott families. Sir J. Berry the mariner was a native.

The parish register of baptisms and burials dates from the year 1538; marriages, 1539. 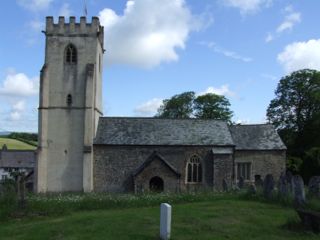 The church of St. Peter is a small building of stone, chiefly in a simple form of the Late Decorated style, with Perpendicular insertions, and consists of chancel, nave of three bays, north aisle, south porch and an embattled western tower containing 6 bells: the east and west windows, one in the chancel and one in the nave, are stained, and another has been given by the parishioners to commemorate the 50 years' residence here of Prebendary Matthews, vicar 1853-1906: a new organ has also been presented: the church has been restored at a cost of about £400, and affords 200 sittings.

We have transcribed the entry for Knowstone from the following:

Online maps of Knowstone are available from a number of sites: