Kennerley (anciently Kynwartlleigh), a parish, with a village, in Devonshire, on the river Creedy, 1½ mile NE of Copplestone station on the L. & S.W.R., and 5 miles N by W of Crediton. Post town, Morchard Bishop. Acreage, 731; population, 83. The manor belongs to the Earl of Iddesleigh. The living is a rectory in the diocese of Exeter; value, £100 with residence. Patrons, the Governors of Crediton Charity. The church is ancient and good. 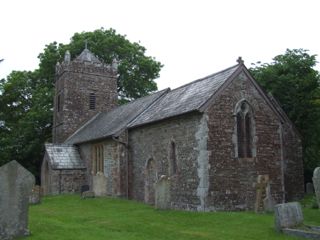 The church of St. John the Baptist is a building of stone, in the Later Perpendicular style, consisting of chancel, nave, south porch and a western tower containing 3 bells; the first is plain but ancient; the second has a reversed inscription in unusual characters and the third is an alphabet bell; all three are cracked: the church was repaired and newly slated in 1847, the chancel being restored by the rector about the same time: a memorial window was afterwards inserted to the Rev. William Owen Tripp: in 1895 the interior of the church was restored, re-floored and re-seated at a cost of £350: there are 100 sittings.

We have transcribed the entry for Kennerley from the following:

Online maps of Kennerley are available from a number of sites: