Ipplepen, a village and a parish in Devonshire. The village stands 3½ miles SSW of Newton Abbot station on the G.W.R., was anciently known as Ipplepine, had once a market and a fair, dating from 1317, and has a post and money order office under Newton Abbot; telegraph office, Newton Abbot. The parish contains also the hamlets of Daignton and Coombe Fishacre. Acreage, 2887; population of the civil parish, 856; of the ecclesiastical, 882. The scenery is beautiful and romantic, abounds in tors or rocky heights, and includes a small valley called Stony Coombes, with several subterranean rivulets. The living is a vicarage in the diocese of Exeter; gross value, £300 with residence. Patrons, the Dean and Canons of Windsor. The church is ancient but good, comprises nave, aisles, and chancel, has a tower 100 feet high commanding a view of thirteen different church towers, and contains a fine carved oak pulpit and a beautiful carved oak screen; in 1883 a new organ was placed in an organ loft then erected. There is a Wesleyan chapel. There was anciently a cell to St Pierre Fougeres.

The Phillimore transcript of Marriages at Ipplepen 1612-1813, Devonshire is available to browse online. 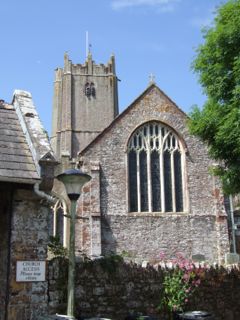 The church of St. Andrew is a large and ancient fabric of stone in the Perpendicular style, consisting of chancel, nave, aisles separated from the nave by arcades of six arches, south porch and a massive embattled western tower with pinnacles, containing 6 bells, of which the first four date from 1799, and the remaining two respectively from 1795 and 1818: the aisles have embattled parapets and a small tower at each angle: the three chancel windows have been filled with stained glass, the east being a memorial to members of the Raynes family, and the north and south to the Robinson family. There is an ancient rood screen of exquisite design, beautifully restored, at a cost of £500, in 1898, and two parclose: the rood loft stairs also remain, and a pulpit of richly-carved oak: the chancel retains a piscina and aumbry, and a stoup remains in the porch: the font is Early Perpendicular, and has a panelled basin with carved figures: there are many mural monuments to members of the Studdy, Shepherd, Neyle and Raynes families: in 1883 a new organ was placed in an organ loft then erected, at a cost of £200, the western gallery being removed: the church was partially restored in 1892 at a cost of £1,000, raised by subscription: the communion plate includes a chalice, supposed to be coeval with the erection of the church: there are 340 sittings. The churchyard is entered through east and west lych-gates, and facing the south door of the church is a massive cross on a granite pedestal, restored in 1902 as a memorial to men from this parish who fell in the Boer war, 1899-1902. 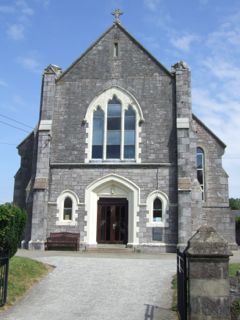 The Wesleyan chapel, erected, with adjoining schools, in 1866, at a cost of £2,000, is a building of limestone, with Bath stone dressings, in the Early English style, and has sittings for 600 persons.

We have transcribed the entry for Ipplepen from the following:

Online maps of Ipplepen are available from a number of sites: