Iddesleigh, a village and a parish in Devonshire. The village stands on the E side of the valley of the Torridge, 4 miles NE of Hatherleigh, and 7¼ SW of Eggesford station on the L. & S.W.R., was known to the Saxons as leddeslegh, and is a pretty place amid romantic scenery. It has a post office under Winkleigh; money order and telegraph office, Hatherleigh. Acreage, 2987; population, 377. The manor belonged in the time of William Rnfns to the De Sullys- one of whom made a great figure as a crusader; passed in the time of Henry VIII. to Sir John Leger, and belongs now to the Earl of Iddesleigh. Sir Stafford Northcote, the first earl, took his title from the village. Ash House formerly belonged to the ancient family of Mallett, but is now the property of the Smyth-Osbourne family. The living is a rectory in the diocese of Exeter; gross value, £460 with residence. The church was thoroughly restored in 1879, comprises nave, aisles, and chance!, with a tower, and contains many monumental tablets. 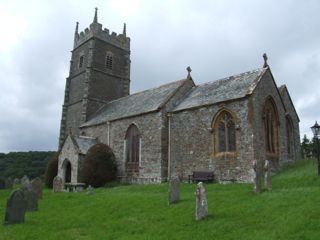 The church of St. James is an ancient building in the Gothic style, consisting of chancel, nave, aisles, south porch and an embattled western tower, with pinnacles, containing 6 bells, of which the first two are dated 1620 and the third 1629; the tenor has an invocation to St. George in old English characters: 2 new bells were added in 1911 to commemorate the coronation of H.M. King George V.: under an obtuse arch in the north aisle is the recumbent cross-legged effigy of a knight in chain mail, covered with a cyclas and bearing a shield, c. 1250, supposed to represent an ancestor of Sir John Sully K.G. a distinguished warrior of the reigns of Edward I. and Edward II. who had "a fair house and two parks" at Iddesleigh, where he died in 1387, age 105: there are memorial windows, erected in 1866, to Hugh Malet, of Ash, d. 1865, and to Maria Louisa Prior: a memorial window has been placed at the east end of the north aisle, by subscription, to Stafford Henry, 1st Earl of Iddesleigh G.C.B., P.C. d. Jan. 12, 1887: the reredos and south chancel window were presented by Mrs. Arnold in 1912 in memory of the late Col. Arnold and Miss Arnold: a new organ was provided in 1897 at a cost of about £120: there are sittings for 120 persons: the church was repaired and partly rebuilt in 1848, at a cost of about £400, and restored in 1879 at an expense of £1,500, and has since been further restored at an additional expense of £300.

We have transcribed the entry for Iddesleigh from the following:

Online maps of Iddesleigh are available from a number of sites: