Bickington, High, a parish in Devonshire. The parish lies on the river Taw, 2 miles NW of the Portsmouth Arms station on the L. & S.W R., and 7½ E of Torrington. Acreage, 4053; population of the civil parish, 583; of the ecclesiastical, 591. It has a post and money order office under Chulmleigh; telegraph office, Umberleigh railway station. A weekly market was held for some time prior to 1725. The parish is a resort of sportsmen. The living is a rectory in the diocese of Exeter; net value, £520 with residence. The church is an ancient edifice of nave, chancel, north aisle, and south transept. There are chapels for Baptists and Bible Christian chapels.

The parish register of baptisms and burials dates from the year 1707; marriages, 1754. 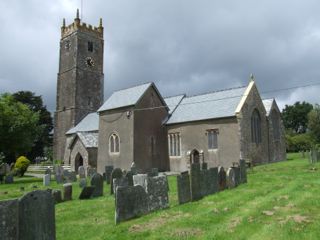 The church of St. Mary is a building of stone in the Perpendicular style, consisting of chancel, nave, north aisle, south transept, south porch and an embattled tower, with pinnacles, containing a clock and 8 bells, all cast in 1753 except the first, which dates from 1827; in 1911 the six old bells were re-cast and two new ones added: the chancel retains a piscina and 3 canopied sedilia, and the east and south windows are stained: in the south transept, now used as a vestry, part of the staircase to the rood loft is still existing: there is a font of Norman date, and the south doorway, which is of the same period, has a stoup: some good carved woodwork also remains: the church was restored during the period 1876-91, at a cost of £900, and affords 250 sittings.

We have transcribed the entry for High Bickington from the following:

Online maps of High Bickington are available from a number of sites: