Halwell, a village and a parish in Devonshire. The village stands 5½ miles SSW of Totnes town and station on the G.W.R., and has a post office (R.S.O.); money order office, Totnes; telegraph office, Harberton. The parish includes also the hamlet of Washbourne. Acreage, 3335; population of the civil parish, 314; of the ecclesiastical, 295. The living is a vicarage in the diocese of Exeter; gross value, £220 with residence. Patron, the Dean and Chapter of Exeter. The church is ancient, but very good, and consists of nave, chancel, and south aisle, with square tower. There is a Congregational chapel. 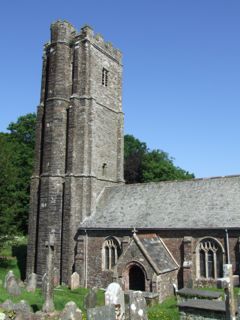 The church of St. Leonard is a building of stone in the Perpendicular style, consisting of chancel, nave, aisles, south porch and an embattled western tower, new roofed in 1897, and containing 6 bells, all cast in 1763 from a previous peal of 4, with the exception of the 4th, which dates from 1823, and was rehung in 1897: the ancient screen was removed in 1810: there are monuments to Major-General Symons, d. 1831, and Ann, his widow, d. 1847: the church affords 220 sittings.

We have transcribed the entry for Halwell from the following:

Online maps of Halwell are available from a number of sites: