Goodleigh, a parish in Devonshire, on the river Yeo, 2½ miles ENE of Barnstaple town and station on the L. & S.W.R. It includes the hamlet of Nortbleigh, and its post town is Barnstaple. Acreage, 1167; population, 239. The land is very fertile, and has long been noted for the production of cherries. The living is a rectory in the diocese of Exeter; value, £190 with residence. The church was built in 1882 on the site of one which had fallen into decay. The square pinnacled tower was built in the time of Charles IL There are Congregational and Bible Christian chapels. 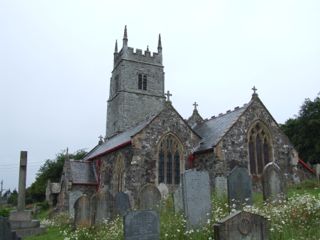 The church of St. Gregory is an edifice of stone in the Perpendicular style, consisting of chancel, nave, south aisle, south porch and an embattled western tower, with pinnacles, containing 6 bells, dating from 1743 to 1828: there are two monuments to the Acland family, d. 1633-55: the east window is stained: the church was rebuilt in 1881-2, at a cost of about £2,500, and will seat 181 persons.

We have transcribed the entry for Goodleigh from the following:

Online maps of Goodleigh are available from a number of sites: