Fremington, a village and a parish in Devonshire. The village stands on the estuary of the Taw, 3 miles W of Barnstaple, and has a station on the L. & S.W.R. 214 miles from London. It was known in the time of the Saxons as Freemanton, was a borough in the time of Edward III., sending members to parliament. It has a post, money order, and telegraph office under Barnstaple. A small creek called Fremington Pill is an anchoring-place of vessels trading with Barnstaple, and a discharging place of coal vessels. The parish contains also the village of Bickington, and is in the rural deanery of Barnstaple. Acreage, 6135; population, 1195. The manor belonged anciently to the Traceys, barons of Barnstaple. Fremington House is a handsome mansion amid extensive grounds, with a fine collection of exotics. Bickington Lodge, Ellerslie, and Brynsworthy also are principal residences. Building stone and potters' clay occur, and a salmon fishery is carried on. The living is a vicarage in the diocese of Exeter; value, £400 with residence. The church is ancient, has a square turreted tower with six bells, and is in good order. There are Congregational and Wesleyan chapels at Bickington and Fremnyte.

The parish register of baptisms and burials dates from the year 1602; marriages, 1708. 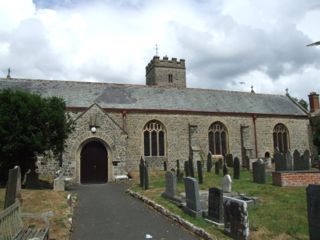 The parish church of St. Peter is a building of stone of mixed styles, consisting of chancel, nave, aisles, north porch and an embattled tower on the north side, containing a clock and 6 bells, of which the 5th, a good bell, has a legend in Old English characters; the 6th, the words AVE MARIA, in Lombardic letters; the 3rd and 4th are dated respectively 1702 and 1664, and the 1st and 2nd were cast in commemoration of the Jubilee of Queen Victoria; there are many monuments and four memorial windows: various alterations were affected in 1845, in the course of which the fine screen was removed, and is now lost: the church was thoroughly restored under the superintendance of Sir George Gilbert Scott R.A. and reopened June 11th 1867: there are 492 sittings.

We have transcribed the entry for Fremington from the following:

Online maps of Fremington are available from a number of sites: