Exbourne, a village and a parish in Devonshire. The village stands near the river Okenent, 4 miles E by S of Hatherleigh, and 4 W of North Tawton station on the L. & S.W.R., and has a post and money order office of the name of Exbonrne (R.S.O.) under Crediton; telegraph office, Hatherleigh. The parish comprises 2315 acres; population, 355. The living is a rectory in the diocese of Exeter; net value, £320 with residence. The church is old but good; and consists of nave, chancel, a south aisle and south porch, and an elegant square tower. The church was well restored in 1886. There is a Bible Christian chapel.

The parish register dates from the year 1540, and there are Churchwardens' books dating from the early part of the reign of Charles II. 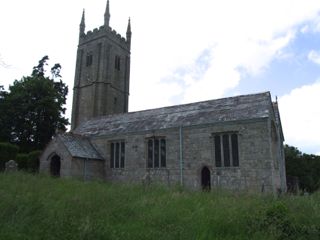 The church of St. Mary is an ancient building of granite in the Early English and Decorated styles, consisting of chancel, nave, south aisle, south porch and an embattled western tower, of Perpendicular date, with crocketed pinnacles and containing 5 bells: the communion plate includes an ancient silver chalice, dated 1577: the ancient screen dating from 1430, was removed in or about 1835, and after having long lain hidden and neglected, was restored and replaced in 1899: in 1890 a handsome communion table was made of old oak from the former rectory buildings; two memorial windows have been inserted, one presented in 1886 by the late John Creemer Clarke esq. J.P. of Waste Court, Abingdon, and M.P. for that borough 1874-85, as a memorial to his father and mother, Robert Clarke, of St. Giles'-in-the-Wood, d. 7 February, 1864, and Graciana (Creemer), his wife; his brother Edwin, d. 8 December, 1848, and Sister Elizabeth, d. 10 May, 1849: the other, placed in 1887, is a memorial to Lieut. Herbert Laing, who died at Mandalay, Burmah, in 1886: there are mural tablets to Simon and Mary Westlake, and to a member of the Tattershall family, of Exbourne; the church was partially restored, and the chancel almost entirely rebuilt in 1886-8, at a cost of £1,050: in 1901 the church was generally reseated in oak, in part at the cost of Miss Hole, in memory of her mother, the late Mrs. Frances Emily Hole, of Hole; the south aisle was reseated in 1909; in 1905 the street walls were removed and a new parapet wall and oak gates erected: the church affords about 200 sittings; the churchyard was planted and laid out in 1886-7.

We have transcribed the entry for Exbourne from the following:

Online maps of Exbourne are available from a number of sites: