Down, East, a parish in Devonshire, round the head-streams of an affluent of the river Taw, 6¼ miles NNE of Barnstaple town and station on the G.W.R. and L. & S.W.R. Post town, Barnstaple; money order office, Combmartin; telegraph office, Bratton Fleming. Acreage, 3677; population, 346. The manor belonged in the time of Edward III. to the family of Downe, and passed to the Pines and the Coffins. Churchill estate belongs to the Chichesters. The southern part around the church is a pleasant valley,. and the northern part rises into bold hills. The living is a rectory in the diocese of Exeter; value, £330. The church is Perpendicular English, consists of nave and aisle with low-square tower, and is good. It was almost entirely rebuilt in 1886.

Findmypast, in association with the South West Heritage Trust, Parochial Church Council, and Devon Family History Society have the Baptisms, Banns, Marriages, and Burials online for East Down 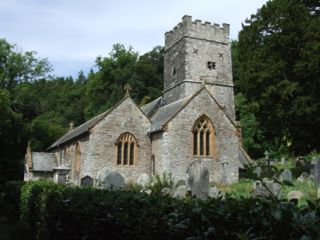 The parish church of St. John the Baptist is an ancient building of stone, in the Perpendicular style, consisting of chancel with aisle, nave, south aisle, south porch and a low embattled tower of earlier date, on the north side, containing 4 bells: the first three are dated respectively 1669, 1712, and 1830; the 3rd bears an indistinct legend in Lombardic characters: the church retains a screen of wood, which was restored in 1925, and in 1886-7 was rebuilt (with the exception of the tower) at a cost of £1,500: there are 180 sittings. In the churchyard is a cross erected to the memory of the men of the parish who fell in the Great War, 1914-18.

We have transcribed the entry for East Down from the following: