Buckland, East, a parish in Devonshire, on an affluent of the river Taw, 2 miles from Filleigh station on the G.W.R. It has a post office at West Buckland, under South Molton; money order office, Filleigh; telegraph office, Filleigh railway station. Acreage, 1612; population, 111. The manor belongs to Earl Fortescue. The living is a rectory, united with the rectory of Filleigh, in the diocese of Exeter; value, £200. Patron, Earl Fortescue. The church is small. It was rebuilt in 1861, but the tower is ancient.

The parish register dates from the year 1684. 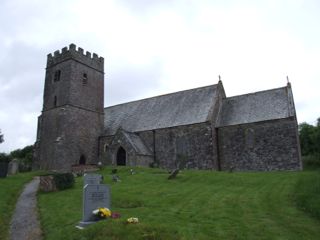 The church of St. Michael is a building of stone in the Gothic style, consisting or chancel, nave, south porch and a low embattled tower on the south-west containing 6 bells: the church, with the exception of the tower, was rebuilt in 1860: the stained east window was erected in memory of Hugh, 2nd Earl Fortescue K.G., LL.D., F.R.S. who died at Exeter, 14th September, 1861: there are 120 sittings.

We have transcribed the entry for East Buckland from the following:

Online maps of East Buckland are available from a number of sites: