Anstey, East, a parish in Devon, on the river Yeo, on the Devon and Somerset branch of the G.W.R., 188 miles from London. Post town and money order office, Dulverton, under Tiverton; telegraph office, Dulverton railway station. Acreage, 3303; population, 234. The surface is hilly. The living is a rectory in the diocese of Exeter; value, £120. The church is fair, and was restored in 1871, and dedicated to St Michael. A revel is held in the first week in October.

The register of baptisms and burials dates from the year 1596: marriages, 1674. 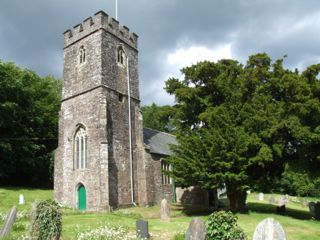 The church of St. Michael, standing on a hill 800 feet above the sea level, at the head of a valley which extends in a westerly direction to within a few miles of South Molton, is a building of stone in the Early English style, with inserted Perpendicular windows, and consists of chancel, nave, south porch and an embattled western tower containing 5 bells: in the porch is a portion of a Norman archway with zigzag moulding: the church was restored in 1871 at a cost of £800, and has 120 sittings.

We have transcribed the entry for East Anstey from the following:

Online maps of East Anstey are available from a number of sites: