Allington, East, a parish in Devonshire, 4¾ miles NW of Start Bay, and 11 from Kingsbridge Road station on the G.W.R. Allington has a post office under Mounts; money order and telegraph office, Kingsbridge. Acreage, 3702; population, 469. The living is a rectory in the diocese of Exeter; net value, £380. The church has a screen, contains monuments of the Fortescue family, and is good; it was restored in 1875. There is a Methodist chapel. Fallapit, in the vicinity, is a noble mansion in the Elizabethan style.

The parish register dates from the year 1554. 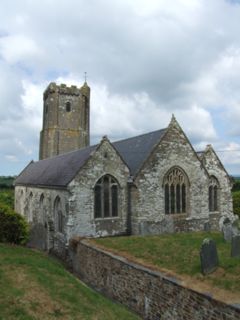 The church of St. Andrew is a building of stone in the Perpendicular style, consisting of chancel, nave of five bays, aisles, south porch and an embattled western tower with turret, containing 6 bells and a clock: in 1908 the 5 old bells were rehung in a new iron frame, and a new treble bell added at a cost of £280: the pulpit and screen, dating from 1547, are fine specimens of rich carving, and bear the arms of the Fortescue and other families who intermarried with them: the east window is a memorial to Mrs. Fortescue, late of Fallapit: there are also several monuments, as well as two brasses in splendid condition, one with effigy, to John Fortescue esq. ob. 1595, and his wife, and an inscribed brass of the 17th century to John Fortescue and Margaret his wife, besides brasses and monuments to the Wells family: a baptistery and stained west window were presented in 1892 by Mrs. Cubitt, in memory of her husband, William Cubitt esq. and at the same time a reredos of white and pink alabaster was erected: a new font of white and pink marble, with carved oak cover, was given by Mrs. Cubitt; and in 1900 a mural memorial was erected to the Rev. Henry Reymundo Fortescue B.A. rector 1844-98: the church was restored in 1875, at a cost of £2,500, defrayed by the late W. Cubitt esq. to whom an inscribed brass has been placed by the workpeople on the Fallapit estate: in 1906 a new chancel door was provided by Lord Ashcombe, who also gave an American organ, in 1913: the church affords 330 sittings.

We have transcribed the entry for East Allington from the following:

Online maps of East Allington are available from a number of sites: