Dolton, a village and a parish in Devonshire. The village stands near the river Torridge, 6 miles NNE of Hatherleigh, and 7 W of Eggesford station on the L. & S.W.R., and has a post and money order office, of the name of Dolton (R.S.O.); telegraph office, Wiukleigh. Markets are lield in December and April. The parish comprises 3616 acres; population, 706. The living is a rectory in the diocese of Exeter; value, £341 with residence. The church is old, consists of nave, chancel, and aisles, with a square tower, and contains the second oldest font in England, and some fine old carved seats; it was thoroughly restored in 1888. There are Baptist, Brethren, and Bible Christian chapels.

The register of baptisms and burials dates from the year 1608; marriages, 1610. 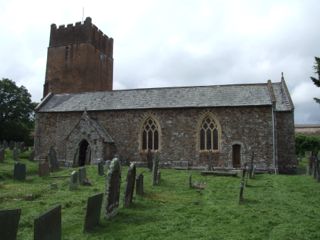 The church of St. Edmund is an edifice of stone, in the Early Decorated style, consisting of chancel, nave of three bays, aisles, south porch and an embattled western tower with pinnacles, containing 6 bells, the first three cast by John Pennington, in 1813; the 4th is dated 1843, the 5th cast by Taylor, of Oxford, in 1828, and the 6th was hung in 1876 by Warner, of London; the church retains a pre-Norman font, dating from about A.D. 680 to 850: there are four memorial windows, one erected by Mrs. Stafford, to her late husband, another by Mrs. Risdon, to the late George Owen, the third, by William Hooper, to his parents, who were formerly of this parish, and the fourth, placed in 1865 by his son, to the Rev. William Kerslake, 57 years rector of this parish: there are also several monuments to the Stafford family, dating from 1590: the chancel and east window were restored in 1874, at a cost of £210, and the church was restored in 1888 and the greater part of it rebuilt at a cost of £1,532: there are 400 sittings.

We have transcribed the entry for Dolton from the following:

Online maps of Dolton are available from a number of sites: