Denbury, a village and an ecclesiastical parish in Devonshire. The village stands 3 miles SW of Newton-Abbot station on the G.W.R., and has a post office under Newton-Abbot; money order and telegraph office, Ipplepen. It was once a borough and a market-town. The manor and Denbury House, a Tudor mansion, belong to the Scratton family. Denbury Down is crowned by an ancient elliptical camp. The living is a rectory in the diocese of Exeter; value, £148. The church is very ancient, with low square tower, was renovated in 1866, and contains several tablets to the Taylors. There is a Baptist chapel. A coffee and reading-room was established in 1879. Population of parish, 331.

The parish register dates from the year 1559. 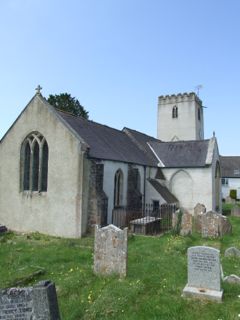 The church of St. Mary is a cruciform edifice of stone, in the Early English and Perpendicular styles, consisting of a long chancel, nave, transepts, south porch and a low embattled western tower, containing a clock and 5 bells: in the chancel is a piscina, projecting at an angle and surmounted by an Early Decorated ogee arch; the drain is deep and curious: the chancel roof is relieved by carved bosses, and there is a priest's doorway: the stained east window was presented by the Rev. James H. Reibey M.A. rector 1859-1901, and there are five other stained windows: the rood loft stairs and traces of a rood loft still exist, and a screen of the 16th century, in good condition, separates the nave from the south transept: in the north transept are remains of the rood-loft stairs: there is a tablet in memory of Major-General Thomas William Taylor C.B. who died in 1754: the font of red sandstone, is apparently Norman: the church was repaired about 1845, at the expense of Miss Froude: the chancel was restored and decorated in 1866, at the cost of the Rev. James H. Reibey M.A. and the church was restored in 1912 at a total cost of £600, raised by subscription (£150 being a gift from two descendants of a former rector for the restoration of the chancel); the cost of restoring the south transept was the gift of the Curtis family; the work was carried out under the auspices of the Society for the Protection of Ancient Buildings, thereby preserving its ancient and historic character: there is a tablet in the north transept which records the reopening of the church and also to the memory of Aeldred, Archbishop of York, who crowned William the Conqueror and at one time administered in this parish: there are sittings for 200 persons. In the churchyard is a very fine yew tree.

We have transcribed the entry for Denbury from the following:

Online maps of Denbury are available from a number of sites: