Crediton, a town, a parish, and a hundred in Devonshire. The town stands between two hills, with a station on the L. & S.W.R., 179 miles from London, and 8 NW of Exeter. It was anciently called Credianton, and is now sometimes called Kerton or Kirton. It dates from very early timeSy but was greatly devastated in 1743 and 1769 by fire, and presents now a modern appearance. It was for many years the seat of a diocese, tranferred in 1049 to Exeter, was seized and somewhat fortified by the rebels in 1549, and, was occasionally occupied by the contending forces in the wars of Charles I. It is divided into two parts, east and west, and consists of a main street about a mile long, and a few minor ones. The old market-house was destroyed. in the fire of 1769, and the present one was erected in 1837. The public rooms in ornamental architecture, with public reading-room and other apartments on the ground floor, and a fine large assembly-room above, were erected in 1852.. The temperance hall was erected in 1889. The parish church was originally founded in 905, is now chiefly Perpendicular English of the 15th century, with recent enlargement and repair, has a central tower, the lower part of which is Late Norman, contains an Early English piscina, and an, altar-tomb of the 14th century, and before the Reformation was collegiate, the first in rank among the collegiate churches of the diocese. There are Congregational, Wesleyan, and Plymouth Brethren chapels in High Street, Baptist in Union Terrace, and Unitarian in Park Street. The free grammar-school was founded by Edward VI., additionally endowed by Elizabeth, and has several exhibitions. Dun's and Thomas' endowed school was established in 1749. The total of endowed charities, which include almshouses, is about £13,000. The workhouse stands about half a mile from the town, and is a fine building, surrounded by a garden. The town has a head post office, a hotel and several inns, ranks as an ancient borough, but without either municipal or parliamentary privileges, and is a fieat of petty sessions. Weekly markets are held on Saturdays, great markets monthly, and on the Saturday before the last Wednesday in April the great market is held, which is the largest fair for cattle in the West of England. A large woollen trade was formerly carried on, but has disappeared, and the chief trades now are shoemaking, tanning, and malting. Winifred or St Boniface, Archbishop of Mentz, was a native. The manor belonged once to the Bishops of Exeter, who made it one of their favourite residences, and belongs now to General Sir Eedvers Bailer, who resides at Downes. Creedy Park is the seat of the Fergason-Davie family. The parish exhibits fine scenery, and is in a high state of cultivation. Acreage, 12,472; population of the civil parish, 5821; of the ecclesiastical, 5813. There are beautiful views from Down Head and Posbury Hill. Traces of ancient fortifications are on Posbury Hill and Blackadown. There are two beneficed clergy attached to the church, the vicar and chaplain, each provided with house and grounds; value of vicarage, £500, and chaplaincy, £300. Patrons, the twelve governors. The perpetual curacy of Posbury is a separate benefice.

The parish register dates from the year 1557 and is practically complete. 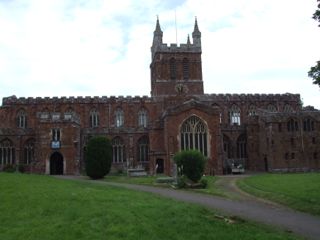 The church of the Holy Cross is a fine cruciform building of stone, 228 feet by 58 feet, the transepts measuring together 85 feet, and consists of choir or five bays, with aisles and clerestory, and an eastern Lady chapel, nave of six bays, with clerestory, aisles, transepts with eastern aisles or chapels, south porch, with parvise, used as a library, and containing some chained books, and a massive embattled central tower containing a clock and 8 bells, all cast in 1774, except the tenor, which is dated 1814: the whole edifice is embattled, and the tower, of two stages, is surmounted by four octagonal embattled turrets, with crocketed spirelets and vanes: the basement of the tower is Norman (1150), the upper part Early English: the building was in progress in 1409 and 1511, but the structure was mainly rebuilt before the middle of the 15th century: the nave has large and lofty windows, and both nave and chancel are of unusual length: the Lady chapel is Early Decorated, and the transepts Perpendicular: in the church is an altar-tomb, with effigy robed and wearing a collar of SS, to William Peryam, ob. October 9, 1604, Justice of the Common Pleas 1581-93, and afterwards Chief Baron of the Exchequer: at the east end of the south side of the choir are two recumbent effigies of a knight in plate armour and a lady; the former wears a bascinet with camail and a hauberk covered by a tunic bearing three chevronels; the female effigy is in a close-fitting dress with mantle, but is much mutilated; these figures are assumed to represent Sir John Sully, a warrior who fought at Cressy (1346) and Poictiers (1356), and in 1385-90, at the age of 105, gave evidence in the famous Scrope and Grosvenor controversy; his wife was one of the co-heirs of FitzRobert, Baron of Torrington: in the north choir aisle is a slab once containing the brass of a bishop, and there are some memorials to the ancient family of Prouse, including a flat stone inscribed to Francis Prouse M.D. of Fordton, ob. 5 October, 1696, his son Francis 1716, and Constance, wife of the latter, 1714; near it is a tablet to Mrs. Honor Prowse, ob. 1 July, 1773; there are also two coffin slabs, bearing crosses: a fine old font remains, and there are three richly worked stone stalls, serving as sedilia, at the back of which, and facing the aisle, is a recess, with a canopy, inclosing a flat table monument: four windows in the Lady chapel and one in the chapel of St. Nicholas are stained: the great west window has been filled with stained glass as a memorial to the Rev. J. R. Nankivell M.A. chaplain 1867-84. at a cost of £300, and in 1896 a stained window was placed at the east end, at a cost of £450; the choir stalls are placed under the central tower: the chancel, raised four steps above the nave, is paved with marble mosaic, and has been furnished with Miserere stalls of English oak, with richly carved tracery and carved poppy heads, at a cost of £450, from designs by Messrs. Tait and Harvey, architects, of Exeter, and executed by Mr. W. Dart: the altar steps are of polished marble and the mosaic paving in the sacrarium is of rich design and highly polished: south-east of the choir is a large building, probably the ancient Chapter House, but now divided into three storeys, containing on the ground flour a convenient vestry and large vestibule; on the next floor are two rooms, one of which is used as a choir vestry; during the refitting of this room at the beginning of 1897 some 20 lbs. in weight of silver coins of the reigns of Elizabeth and Charles II. were found concealed under the floor; on the upper floor is a spacious room, now used for the meetings of the "Corporation of the Governors of the Church," and containing some curious ancient chests, and pieces of old armour: a brass memorial tablet has been placed in the church near the pulpit in memory of the late General Sir Redvers Buller, d. 1908, by his only daughter: in 1911 a part of the chancel was redecorated in memory of the late General Sir Redvers Buller P.C., V.C., G.C.B., G.C.M.G. and a churchyard cross was erected in the same year: the church was restored in 1880-81, at a cost of £1,400, and refloored and reseated in 1887, at a cost of £2,500, and has 900 sittings; the Governors' room was restored in 1905.

The first church, which stood on or near the site of the present building, was from A.D. 909 to A.D. 1050 the cathedral of the bishops of Devonshire, who were also, from 1032, bishops of Cornwall: on the removal of the see to Exeter, by Bishop Leofric, the church was made collegiate, with a precentor as president, a treasurer, dean or perpetual vicar, 18 canons, as many vicars, and choral members: after the Dissolution the church, with some lands, was granted for the sum of £200, by Edward VI. by deed dated 2nd April, 1547, to twelve of the principal inhabitants, viz. nine of Crediton and three of Sandford, incorporated as the Twelve Governors of the church of Crediton, by whose successors the church is still kept in repair out of the great tithes of Crediton, Sandford and Exminster, with which they are endowed for that purpose.

We have transcribed the entry for Crediton from the following:

Online maps of Crediton are available from a number of sites: