Chittlehampton, a village and a parish in Devonshire. The village stands 3 miles NE of Umberleigh station on the L. & S.W.R., and 5 W of South Molton, under which it has a post and money order office; telegraph office, Umberleigh railway station. Acreage, 5954; population of the civil parish, 1076; of the ecclesiastical, 1186. The parish includes also the hamlets of Bidacott. Blakewell, Brightley, and Eastacott. The manor belongs to the Rolle family. The living is a vicarage in the diocese of Exeter; net value, £375 with residence. The church is Perpendicular Englisli and cruciform, and contains a sculptured stone pulpit, and fine monuments to the Giffords and the Rolles. There are small Wesleyan and Plymouth Brethren chapels. An ancient stone cross, on a lofty pedestal, stands about half a mile E of the village, and another, a monolith, at Eastacott.

The register of baptisms dates from the year 1575; marriages and burials, 1576, and the earliest entries are those of the Saunder family. 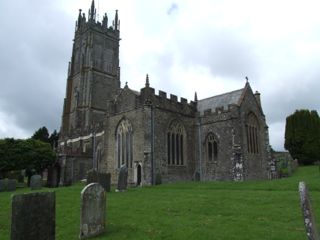 The church of St. Hieritha is an ancient building of stone in the Early English and Perpendicular styles, consisting of chancel, nave, aisles, transepts, south porch and an embattled western tower, with pinnacles, containing a clock and 8 bells, 6 of which, cast in 1739, were given by Samuel Rolle esq. of Hudscott; the remaining two were added in 1879: the north chancel aisle has a good panelled roof: the stone pulpit, of the same period as the tower, is adorned with carved figures of saints under canopies; and the east and west windows are stained: in the north transept is an altar-tomb with effigies, and two kneeling figures (male and female) below, and an inscription to John Giffard esq. of Brightley, and Honor, his wife, and their children, erected in 1625 by John Giffard, his grandson: in the north aisle of the chancel is a recumbent effigy of a lady, with inscription to Mistress Grace Giffard, ob. 1667: there are other fine monuments to the Rolle and Giffard families, including inscribed stones to Caesar Giffard esq. d. 1715; John Giffard, of Atherington, d. 1725, and Elizabeth, his wife; John Giffard esq. of Dublin, d. 1819, and Sir Ambrose Giffard kt. Chief Justice of Ceylon, d. 1827: on the floor of the chancel are brasses, with effigies and inscriptions to John Cobleigh, Isabella, his wife, ob. 1 Oct. 1446, and Joan, his wife, ob. 30 Sept. 1480; and to Henry Cobleigh, ob. 30 July, 1470, and Alice, his wife: there are also memorials to the Morris and Saunder families: the church was restored in 1871-4, at a cost of over £4,000, when an organ was given by Miss Trefusis, and a new lych-gate by Mrs. Short in memory of her husband, J. B. Short esq. who died at Hudscott: there are 450 sittings.

We have transcribed the entry for Chittlehampton from the following:

Online maps of Chittlehampton are available from a number of sites: