Charleton, a village and a parish in Devonshire. The village stands on a sea creek, 2 miles SSE of Kingsbridge, and US by E of Kingsbridge Road railway station, and is a straggling place in two parts called East and West. Post town, Kingsbridge. Acreage, 1094; population of the civil parish, 295; of the ecclesiastical, 515. The ecclesiastical parish includes also the hamlets of Goveton, Lidstone, and part of Frogmore. The living is a rectory in the diocese of Exeter; net value, £393 with residence. Patron, Countess Compton. The church is ancient, consists of nave, chancel, south transept, and north aisle, with a tower, and has an ancient carved screen. There is a mission chapel at Goveton, and a mission room at Frogmore. Charleton Bridge, built in 1864, and rebuilt in 1873, consists of four arches, and has a swing bridge to allow navigation in the creek. Charleton, Berks. See CHARLTOX.

The parish register dates from the year 1560. 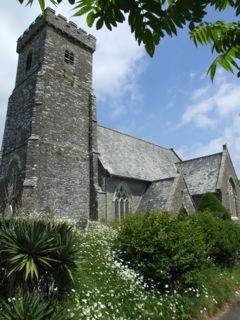 The church of St. Mary is an edifice of stone, chiefly in the Decorated style, restored, except the tower, in 1849-50, at a cost of £1,300, and consists of chancel, nave, transept, north aisle, south porch and an embattled western tower, with turret, formerly containing 4 bells, 3 of which have been recast and 2 new ones added at a cost of £250: the pulpit and font are of Caen stone: the chancel retains sedilia and piscina, and there are several tablets to the Twysdell family, and a memorial erected to the late Capt. J. S. Twysden R.N. in 1912, by his widow: the stained east window is a memorial to the Rev. Thomas Twysden M.A. vicar 1842-88: there are also two small memorial windows to Mrs. Twysden, and a large tablet in the south transept to the Rev. Thomas Whinyates, a former rector: there are 350 sittings.

We have transcribed the entry for Charleton from the following: