Buckland in the Moor, Devon

Buckland-in-the-Moor, a parish in Devonshire, on the river Dart, adjacent to Dartmoor, and 3 miles from Ashburton station on the G.W.R. Post town, Ashburton, which is the money order and telegraph office. Acreage, 1493; population, 71. The manor, with Buckland House, belongs to the family of Bastard. Buckland Beacon is a rocky eminence commanding a very brilliant panoramic view. The living is a vicarage, annexed to the vicarage of Ashburton, in the diocese of Exeter. The church is small.

Findmypast, in association with the South West Heritage Trust, Parochial Church Council, and Devon Family History Society have the Baptisms, Banns, Marriages, and Burials online for Buckland in the Moor 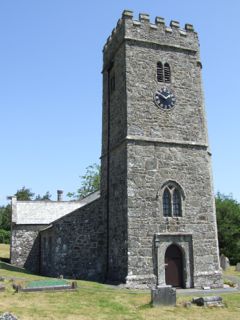 The church, dedicated to St. Peter, as appears from the will of Robert Carselegh, dated 22nd June, 1547 (1 Edward VI.) and proved at Exeter, is an ancient building, chiefly in the Perpendicular style, and consisting of chancel, nave, separated from a north aisle by an arcade of three arches on clustered piers, north transept, south porch and an embattled western tower containing 5 bells: the font is of late Norman date and has the zigzag ornament and cable moulding: the screen is handsome and has figures of saints in the panels, and at the back are grotesque paintings of 15th century date. Buckland church formerly belonged to Torre Abbey, but had been alienated previously to the dissolution of monasteries: there are 120 sittings.

We have transcribed the entry for Buckland in the Moor from the following:

Online maps of Buckland in the Moor are available from a number of sites:

Buckland in the Moor