Buckland-Tout-Saints, a parish in Devonshire, 2 miles NE of Kingsbridge station on the G.W.R. Post town, Mounts; money order and telegraph office, Kingsbridge. Acreage, 1872; population, 260. Buckland House is a chief residence. The living is a chapelry, annexed to the vicarage of Loddiswell, in the diocese of Exeter. The Chapel of St Peter was mostly rebuilt in 1779. The place is named after the Toussaint family, who resided there anterior to the 13th century.

The register dates from the year 1807. 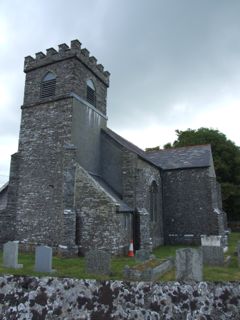 The chapel of St. Peter, rebuilt in 1779, is a building of stone, in the Perpendicular style, consisting of chancel, nave, transepts, north porch and an embattled western tower containing one bell: there are monuments to the Clark and Brunskill families: the chancel was thoroughly restored in 1890-4, at a cost of £500, and a stained east window erected to the Brunskill family by Mrs. Irwin, late of Buckland Manor House: the windows of the transepts were filled with stained glass in 1911 in memory of Mrs. Irwin: the chapel has 125 sittings.

We have transcribed the entry for Buckland Tout Saints from the following: