Bideford, a town, a municipal borough, and a parish in Devonshire. The town stands on the river Torridge, 5 miles above its influx to the sea, and on the L. & S.W.R., 220 from London. It was formerly a separate port, but is now included in that of Barnstaple. Its site is chiefly a hillside on. The left bank of the river, amid pleasant environs, and commands delightful views of the river's vale. The place was given soon after the Conquest to Richard de Granville, a Norman knight; remained with his descendants till 1750, and was then sold by one of the heirs of William Granville, third Earl of Bath, to J. Cleveland, Esq., of Tapley. It gave the title of Baron in the time of Queen Anne to Lord Lansdown. Forts were erected at it on both sides of the river by the Parliamentarians, in the Civil War; but they were taken for the king by Colonel Digby in 1643, and one of them, called Chudleigh Fort, a small battlemented structure, is still standing. The plague raged here in 1646 and 1680, and three aged female inhabitants were put to death on a charge of witchcraft in 1682. The French privateers in the time of Queen Anne captured so many valuable vessels engaged in the town's commerce in their crossing the bay off the river's mouth, that they called it the Golden Bay. The streets are wide and airy, some new good houses have taken the place of old mean ones, and there are noble mansions and a series of villas in the outskirts. A bridge of 24 arches and 677 feet long, erected in the early part of the 14th century, forms the approach on the NE; it was widened in 1863-65, at a cost of about £5000, and is a favourite promenade. The town-hall is an ornamental edifice of 1850, and serves for courts, town business, and concerts. The parish church was rebuilt in 1865; it superseded an Early English structure, and is large and handsome. It contains a fine old Norman font, a monument to Sir Thomas Granville (15th century), and a handsome brass was erected in 1891 to commemorate the three-hundredth anniversary of the heroic death of Sir Richard Granville in the Revenge. There are also several quaint old monuments and tombstones in the church and churchyard. A new church, dedicated to St Peter, was erected east of the river in 1888. The Congregational chapel was rebuilt in 1859, and is a very fine edifice. A handsome new Wesleyan chapel, with Sunday schools attached, was erected in 1892. The Bridge Hall, erected in 1882, is a fine stone building in the Renaissance style, containing a free library, reading-room, a school of science and art, and the Bridge Hall chambers. The Public Rooms were erected in 1871, and contain a music hall with orchestra. The market, erected in 1883-84, is a fine building of red brick and terracotta. The infirmary and dispensary was erected in 1888. There are chapels for Baptists and Bible Christians, a Roman Catholic Church, a Ladies' College, a free grammar school, two political clubs, almshouses, and a workhouse. The charities amount yearly to £35; the Bridge Trust produces £563 annually for keeping the bridge in repair. The quay adjoins the bridge, is upwards of 1250 feet long, admits vessels of 500 tons at high water, was considerably widened in 1891, and laid out with trees and paths as a promenade. The number of vessels registered as belonging to the port in 1893 was 80 (4242 tons). The town has a head post and telegraph office, a railway station, three banking offices, three chief inns, two weekly markets, and publishes two weekly newspapers, and is a seat of sessions and a polling-place. There is now no shipbuilding here, but the prosperity of the town has greatly increased since 1883 by the rapid development of the cuff and collar manufacture. There is also a large iron foundry, two small potteries, some tanneries, and a number of malting establishments. Population of the municipal borough, 7831 The port formerly had a large foreign commerce, but is now engaged chiefly in the coasting trade. The chief exports are oak-bark, corn, earthenware, and tiles; and the chief imports timber, coal, artificial manures, and lime. The town sent members to Parliament in the times of Edward I. and II., but not since; was incorporated by Queen Elizabeth, and is now governed by a mayor, 4 aldermen, and 12 councillors. Sir R. Granville, the naval hero, Dr. John Shebbeare, author of the "Adventures of a Guinea," and Abraham and Benjamin Donne, the mathematicians, were natives; Strange, the philanthropist, died here of the plague in 1646, and Hervey, the author of "Meditations," was for some time curate, and wrote here part of his works.

The parish is conterminate with the borough. Acreage, 3398; population, 7831. The living is a rectory in the diocese of Exeter; value, £618.

The parish register dates from the year 1561. 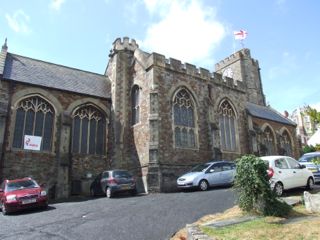 The parish church of St. Mary is a fine building of local stone in the Perpendicular style, consisting of chancel, nave, aisles, transept, north and south porches and a tower containing a clock and 8 bells, six of which date from 1772 and the fourth from 1810: there are several stained windows, including one to Lady Elizabeth (O'Bryen), wife of Sir George Stucley bart. d. May 1870: on the south side of the chancel is a monument to Sir Thomas Graynfyld (Grenville) knt. patron of this church, ob. 18 March 1513, with effigy in armour, and on the tomb are shields of arms of Grenville, and Grenville impaling Gilbert, this knight having married Isabel, daughter of Otto Gilbert, of Compton Marldon: the chancel also retains a stone screen, and there is a fine Norman font with cable moulding: the church with the exception of the tower, was rebuilt in 1865: it seats 1,150.

We have transcribed the entry for Bideford from the following:

Online maps of Bideford are available from a number of sites: