Berrynarbor, a village and a parish in Devonshire. The village stands on an eminence on the coast, 3¼ miles E of Ilfracombe station on the L. & S.W.R., and has a post and telegraph office under Ilfracombe, which is the money order office. It contains a richly sculptured mansion of the time of Edward IV. The parish comprises 4980 acres; population, 652. Bowden farmhouse was the birth-place of Bishop Jewel. A small circular camp occurs about ½ a mile from the shore. The living is a rectory in the diocese of Exeter; net value, £480 with residence. The church has a Norman arch, an Early English chancel, a Perpendicular nave, a Decorated, high, massive tower, was restored in 1862, and again in 1887. There is a Congregational chapel.

The parish register dates from the year 1540. 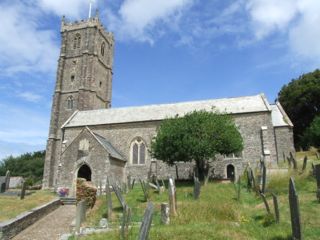 The parish church of St. Peter is an ancient edifice of stone, in the Norman, Early English and Perpendicular styles, consisting of chancel, nave, south aisle, south porch and a very fine embattled western tower of Perpendicular date, 96 feet in height, with pinnacles, containing a clock and 6 bells: the chancel and nave are Norman and Early English, and the south aisle Perpendicular: in the church are monuments to the Berry family: the stained east window, erected in 1861, is a memorial to Samuel Thomas Slade Gully and W. A. Slade Gully M.A. and the window in the north wall to Mr. and Mrs. Fursdon; there is also a stained window in the south asile, erected in 1883, to Miss Basset, of Watermouth Castle: in the vestry is an engraved portrait of Bishop Jewell, presented to the church by the Rev. Aubrey Townsend B.D. in 1861: the church is supposed to have been built in the 16th century: it was repaired in 1862, and further in 1880; in 1887 the roof was renovated at the expense of Mrs. Basset: the chancel was restored in 1889, and additional work was carried out in 1890, the total cost from 1880 amounting to £1,085: there are sittings for 300 persons: the lych gate on the south side of the churchyard was erected in 1671: in the churchyard is a cross erected in memory of the men of the parish who fell in the Great War, 1914-18.

We have transcribed the entry for Berrynarbor from the following:

Online maps of Berrynarbor are available from a number of sites: