Beaford, anciently called Beauford, a parish in Devonshire, on the river Torridge, 5 miles SE of Torrington, and 6 WSW of Umberleigh station on the L. & S.W.R. It has a post and money order office (R.S.O.); telegraph office, Torrington. Acreage, 3295; population, 494. The living is a rectory in the diocese of Exeter; net value, £224 with residence. The church is an old-fashioned edifice with a low tower. It was restored and reseated in 1879. There are Baptist and Bible Christian chapels.

The parish register dates from the year 1653. 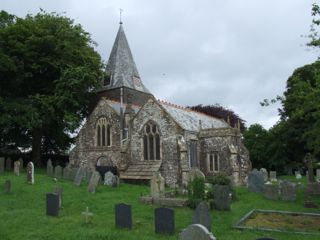 The church of All Saints is a building of stone in the Decorated style, consisting of chancel, nave, south aisle, south porch and a western tower erected in 1910 at a cost of £1,100 and containing 6 bells; the first is inscribed "Plebs ois plaudit ut me tam sepius audit;" the second "Est michi collatum IHS istud nomen amatum;" both in old English lettering; the tenor, dated 1720, weighs 6 cwt. and 3 qrs.; two of the old bells have been recast and 3 new ones added: the font is ancient, and there is some good carving in the roof: the church was restored and re-seated and the windows re-glazed in 1878-9, a new stone pulpit, a chancel screen, by Hems, of Exeter, lectern and reading desk being also erected at a cost of about £1,300: the stone pulpit and the chancel screen were both gifts of the late Archdeacon Furse: the Upcott aisle was restored at the expense of the late T. W. Snell esq.; the altar cloth and chancel fittings were given by the late rector, the Rev. Joseph Ray: there is a monument to John Sing, of Clement's Inn, London, 1667, and Thomas Sing, of Warham, 1692; and a tablet to Margaret, wife of Hugh Mill, a former rector of this church, 1686: over the south porch is an ancient sun dial: there are 250 sittings: the old stocks still remain in the churchyard.

We have transcribed the entry for Beaford from the following:

Online maps of Beaford are available from a number of sites: