Bampton, a small town and a parish in Devonshire. The town stands in a vale, on the rivulet Batheme, about a mile above its influx to the Exe, on the G.W.R., 179 miles from London, and 7 N of Tiverton. It was anciently called Bahantune, Baunton, Bathampton, and Bathrumpton, and it disputes with Bampton in Oxfordshire as being the Beam-dune of the Saxon chroniclers, where, in 614, the Britons were defeated with great slaughter by Cynegilsus, king of the West Saxons. It is supposed by some to occupy the site of a Roman station, and it had a castle, erected in 1336 by a member of the Cogan family, on a knoll at the east end of Castle Street, now called the Mount, and crowned with firs. The town consists of stone houses, irregularly scattered over a space of about ½ a mile, and has picturesque environs. It was formerly a borough, and sent two members to Parliament, and was governed by a portreeve and other officers. A weekly market is held on Saturday; fairs on Whit-Tuesday and the last Thursday in Oct.; and great markets for cattle, sheep, and Exmoor ponies on the last Wednesday in Nov. and the Wednesday before Lady Day. It has a post, money order, and telegraph office. John de Bampton, a Carmelite friar, who first read lectures on "Aristotle" at Cambridge, and died in 1391, was a native. There is a reading room and library, and public rooms for entertainments. Combe Head and Wonham House are residences in the neighbourhood.

The parish includes also the hamlets of Petton and Shillingford. Acreage, 7799; population, 1672. Limestone is worked. The living is a vicarage in the diocese of Exeter; net value, £176 with residence. The church is Decorated and Perpendicular English; consists of nave, aisle, and chancel, with western tower; and contains a fine carved oak screen, and monuments of the Bourchiers. A chapel of ease is at Petton, and a Baptist chapel in the town.

The parish register dates from the year 1653, but is very imperfect. 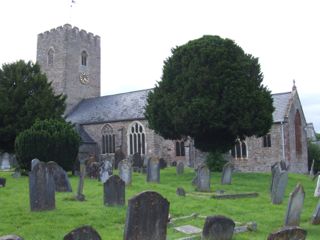 The church of St. Michael is a building of stone in the Decorated and Early Perpendicular styles, consisting of chancel, nave of five bays, north aisle, south porch and an embattled western tewer, containing a clock with musical chimes and 6 bells: a finely-carved oak screen, groined on both sides and adorned with the cognizances of the Bourchiers, separates the nave from the chancel, and the roof is of panelled oak with carved bosses similarly ornamented; built into the north wall of the chancel are the sides and ends of two altar-tombs, with elaborately traceried panels, inclosing shields, and having a cornice of quatrefoils, bearing the Bourchier knot and the water-bouget: these tombs originally covered the remains of Fulk Bourchier, 2nd Baron Fitzwarine, ob. 1479, and John Bourchier, his son, created (July 9, 1536) Earl of Bath, ob. April 30, 1539: the once beautiful window tracery has been much mutilated, but one of the windows retains the ancient stained glass inserted by John Bourchier, 2nd Earl of Bath, in 1540: three new windows were added in 1906, one by Mrs. Holland, and two by the then vicar: a new organ was provided in 1913; there are 330 sittings: in the churchyard are several fine yew trees.

We have transcribed the entry for Bampton from the following:

Online maps of Bampton are available from a number of sites: