Atherington, a village and a parish in Devonshire. The village stands on a hill, adjacent to the river Taw, 1 mile from Umberleigh station on the L. & S.W.R., and 7 miles SSE of Barnstaple, under which it has a post office; money order office, High Bickington; telegraph office, Umberleigh railway station. The parish comprises 3337 acres; population, 475. The manor belongs to the Bassetts. A palace of King Athelstan is said to have stood at Umberleigh, and an ancient chapel was there, which also is said to have been built by him. The living is a rectory in the diocese of Exeter; value, £416. The church is an ancient edifice, of nave, chancel, and north aisle, and was thoroughly restored in 1844. It was a cell to Caen Abbey, and contains a very handsome carved screen, and two recumbent effigies of the 15th century, brought to it in 1800 from the chapel at Umberleigh. There are a Baptist chapel in the village, and a Wesleyan chapel at Langridge. 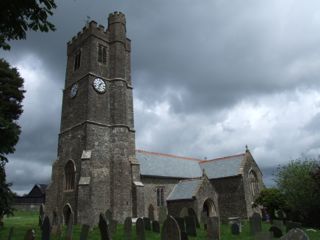 The church of St. Mary, originally built in the Early English period, is an ancient building of stone, chiefly in the Perpendicular style, consisting of chancel, nave, aisles, south porch and an embattled western tower containing a clock and 6 bells, cast in 1786 and rehung in 1912: the church retains a lofty and very richly-carved oak screen of Late Perpendicular date, with a rood-loft, the only one in Devon, across the north aisle: the stained east window is a memorial to the Rev. James Arthur: the bench ends are of carved oak: on the north side of the chancel is an altar tomb, panelled round the sides in quatrefoils and retaining on the upper slab effigies in brass of a knight in full armour, between two ladies; below these are small figures in two groups of 12 children, and at the angles are shields of arms (one being lost); the persons commemorated are Sir John Basset kt. ob. 1528, and his wives Elizabeth (Denys) and Honora (Grenville): in the north aisle lies the mutilated effigy of a warrior of the 13th century, in chain armour, and wearing a cyclas, the arms and legs being now lost; the figure has been assigned to Sir William de Champernowne kt.: in the chancel are two other recumbent effigies of the 14th century of a knight in full armour and surcoat with the arms of Willington, conjectured to represent Sir Ralph Willington kt. ob. 1349, and Lady Eleanor (Mohun) his wife; all these effigies and the oak screen are said to have been removed here from the desecrated chapel at Umberleigh: the church was restored in 1884 under the direction of the late J. L. Pearson esq. R.A. at a cost of about £3,000, when the walls were partly rebuilt, at the expense of Mrs. Basset, of Watermouth Castle: the clock was placed in the tower and a lych gate built at the cost of the Arthur family: there are 250 sittings.

We have transcribed the entry for Atherington from the following:

Online maps of Atherington are available from a number of sites: