Ashford, a parish in Devon, on the north side of the estuary of the Taw, 2½ miles NW of Barnstaple, and 2 from Wrafton station on the Ilfracombe branch of the L. & S.W.R. Post town, Barnstaple; nearest money order and telegraph office, Pilton. Acreage, 368; population, 151. The living is a rectory in the diocese of Exeter; value, £92. Patron, the Lord Chancellor. The church was built in 1854, and is a neat small edifice, with low square tower and a spire. The views nearly opposite Westward Ho are among the finest in Devon.

The parish register dates from the year 1700. 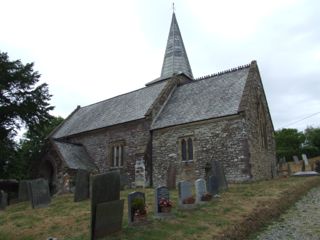 The parish church of St. Peter is an edifice of stone in the Early Decorated style, rebuilt in 1854 at a cost exceeding £500, and consisting of chancel, nave, north aisle, north transept and a small tower with spire on the north side containing 2 bells of early date: the chancel retains the ancient piscina, and the east and south windows are stained: the whole of the woodwork of the church and vestry, including the communion table, pulpit and pews, are of ancient carved oak and in good preservation: there are 150 sittings.

We have transcribed the entry for Ashford from the following:

Online maps of Ashford are available from a number of sites: