Ashburton, a town and a parish in Devon. The town stands on the Yeo, about 1½ mile from the Dart, near the grandest part of Dartmoor, 7 miles NNW of Totnes station on the G.W.R., and 227 from London. The town has a post, money order, and telegraph office. It was anciently called Asperton and Aisbertone. It belonged to the Crown at Domesday; was given to the see of Exeter before 1310; became a stannary town in 1328, on account of tin and copper mines in its neighbourhood; belonged to the Crown again in the time of Charles I.; was taken by Fairfax in 1646; and went, after various changes, into the possession of Lord Clinton. It consists principally of three streets, and has a neat appearance. The market-house has a lofty basement for market purposes, and an upper story with public rooms, and is a fine edifice in the Italian style, built in 1850. The parish church is a spacious cruciform structure, of Perpendicular date, with modern alterations, surmounted by a central tower, 90 feet high, was formerly collegiate, and contains some fine monuments. It was restored in 1884. There are four dissenting chapels, a grammar-school, with £80 of endowed income, and two exhibitions and two scholarships at Exeter College, Oxford. A weekly market is held on Saturday, and fairs on the first Thursday in March and June, 10 Aug., and 11 Nov. Some very extensive beds of umber are in this parish, and three companies are engaged in preparing it. The Ashburton and Buckfastleigh Cottage Hospital is a building of granite with freestone facings, erected in 1887 at a cost of about £1500. The town is a borough by prescription; sent two members to Parliament in the times of Edward I. and Henry IV., and from 1640 till 1832; and was half disfranchised by the Act of 1832, and entirely in 1868. John Dunning, solicitor-general in 1767, Dr Ireland, dean of Westminster, and William Gifford, the well-known editor of the Quarterly Review, born in 1756, were natives. A peerage, with the title of Baron Ashburton, was given to Dunning in 1782, and, becoming extinct in 1823, was revived in favour of Alexander Baring in 1835. The parish is co-extensive with the borough. Acreage, 6963; population of the civil parish, 2762; of the ecclesiastical, 2838. The living is a vicarage, in annexation with the vicarage of Buckland-in-the-Moor, in the diocese of Exeter; value, £525. Patrons, the Dean and Chapter of Exeter.

The parish register commences in the year 1603.

The church of St. Andrew is an ancient cruciform structure of stone in the Perpendicular style, consisting of chancel, nave, transepts, aisles, north porch and lofty embatt1ed western tower with turret 92 feet high and containing 8 bells, refitted in 1896, and a striking clock, provided in 1887, at a cost of £200: the north porch is of Transition Norman date: the north aisle was built in 1315, the south aisle between 1420 and 1455: the head of King Edward II. occurs amongst the bosses in the roof of the north aisle: the south aisle is the burial place of the Dunning family: there are eight stained windows, and in the south aisle is a tablet, with inscription by Dr. Johnson, to John Dunning, 1st Baron Ashburton, d. 18th August, 1783: the ancient rood screen, erected in 1525 at a cost of £20, was removed in 1718, and the pulpit and oak eagle lectern were sold in 1777 to the parish of Bigbury for £11 11s.: the church was restored during the period 1884-8, under the direction of the late G. E. Street R.A. at a cost of £5,970, when the nave was reseated in oak and the chancel fitted with oak stalls and separated from the aisles by parclose screens: a new organ and case were added in 1912 at a cost of £1,200: there are about 800 sittings. 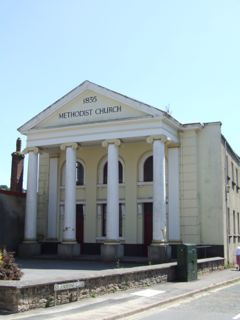 The Wesleyan chapel, West street, erected in 1835, is a building of the Doric order and will seat 700 persons.

We have transcribed the entry for Ashburton from the following:

Online maps of Ashburton are available from a number of sites: