Arlington, a parish in Devon, near East Down, 6 miles NNE of Barnstaple station on the G.W.R. and L. & S.W.R. It has a post office under Barnstaple; money order office, Comb Martin; telegraph office, Bratton Fleming. Acreage, 2590; population of the civil parish, 238; of the ecclesiastical, with Loxhore, 430. The manor belongs to the Chichester family, and came into their possession in the time of Henry VII.; Arlington Court, the family seat, is a very handsome edifice. The living is a rectory in the diocese of Exeter; value, £305. The church, with the exception of the tower, has been rebuilt; it is in the Gothic style, and contains many memorials of the Chichesters. 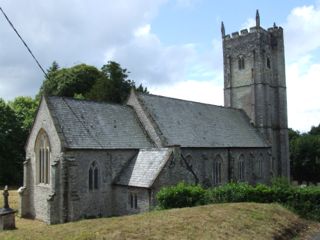 The parish church of St. James, rebuilt in 1846, under the direction of Mr. Gould, architect, is an edifice in the gothic style, consisting of chancel, nave, south porch and an embattled western tower, with pinnacles, containing 6 bells, all re-cast in 1855: in the church is a fine but somewhat mutilated effigy of a lady in wimple and flowing robes, and wearing a headdress of the Henry IV. period; it has been assumed to represent a member of the Raleigh family, who held this place in the 14th century, the lady having married John Chichester in 1384: the stained east window is a memorial to the Rev. J.H.J. Chichester, 60 years rector, who died in 1884: there are mural tablets to John Chichester, ob. 1644; Robert Chichester, ob. 1622, and several others to the Chichester family of more recent date: a new organ was erected in 1891: the church affords 200 sittings.

We have transcribed the entry for Arlington from the following:

Online maps of Arlington are available from a number of sites: