Wight, Isle of, an island off Hants, bounded on the N by the Solent, on the other sides by the English Channel. Its outline is irregularly rhomboidal, and has been compared to that of a turbot and to that of a bird with expanded wings. Its length from E to W, from Bembridge Point to the Needles, is nearly 23 miles; its greatest breadth from N to S, from West Cowes to St Catherine's Point, is 13 3/4 miles; its circuit is about 56 miles; and its area, inclusive of foreshore, is 99,746 acres. The general surface has a considerable elevation above sea-level. The coast along the N is low, around the W angle is rocky, broken, precipitous, and romantic, and along the SW, the S, and the SE breaks down in a richly varied series of cliffs, often abrupt or mural, extensively terraced and lofty, including all the magnificent range known as the Undercliff, and everywhere replete with scenic interest. The watershed uniformly follows the trending of the S coast, and is distant from it never more than 2 1/2 miles, generally less than 1 mile. A range of downs extends about 6 miles from St Catherine's Hill to Dunnose, rises from the shore with excessive steepness to a height of nearly 800 feet, and is marked along its steep sea-front with the picturesque terraces of the Undercliff. A diversified range of downs extends about 22 miles from the Needles on the W to Culver Cliff on the E, commences in grand cliffs about 600 feet high, runs 9 miles nearly due east in a single, sharp, steep ridge to Mottiston, attains there its highest altitude at 662 feet above sea-level, makes several debouches in its subsequent progress, suffers repeated cleaving and disseverment in the form of gaps or depressions, assumes for some distance in the neighbourhood of Carisbrooke the character of a double or a triple range, is in some parts of its course saddle-shaped and slender—in other parts broad-based and moundish, and divides the island into two pretty nearly equal sections. A transverse ridge, about 400 feet high, extends about 3 miles in the W contiguous to the river Yar, and another transverse ridge, tame in feature, but sometimes of considerable height, extends between the Medina and the Brading. The rest of the surface is either undulating or gently sloping, and has little or no claim to be called picturesque. The chief streams are the Yar, the Newton, the Medina, the Wooton, and the Main or Brading. The geological structure comprises chiefly lower greensand in most of the S, chalk in part of the centre, and upper eocene in most of the N, but includes many details, possesses deep interest, and may advantageously be studied. The island is well supplied with railways. The climate renders it a highly favourable residence for invalids throughout the year; the temperature is so mild that myrtles, fuchsias, and geraniums, which attain a great size, live through the winter without protection. The whole of the island affords interesting studies to botanists and geologists.

Agriculture employs most of the inhabitants. It was once in a backward condition, but has made great progress in recent years. Wheat is the staple produce. Southdown or Dorset sheep are extensively pastured on the hills. The farmhouses are generally good, and some of them were formerly mansions. Fisheries are carried on, but are not very productive. Bricks, draining tiles, and coarse pottery are made in several places. Cement mills are on the Medina below Newport. Shipbuilding is carried on at West Cowes.

The island is governed by a captain and governor, and a county council consisting of 10 aldermen and 30 councillors. Petty sessions and county courts are held at Newport, and criminal offenders are sent to Winchester. One member is returned to Parliament. The chief towns are Newport, Ryde, West Cowes, Sandown, Shanklin, Ventnor, Freshwater, and Yarmouth. The chief seats include Osborne, the marine residence of Her Majesty, which has been separately described.

The Isle of Wight was known to the ancient Britons as Guith or Guiet, to the Romans as Vecta or Vectis, to the Saxons as Wiht, Whit, or Wight. The ancient British name signifies divided or separated, and is supposed to indicate that the island was dissevered from the mainland by the gradual formation of the Solent. Much discussion has been carried on as to whether Ictis, mentioned by Diodorus Siculus as a depot of the ancient tin trade to Gaul, was the Isle of Wight or some part of Devon or Cornwall. The Romans took possession of the island in the year 43, and held it for about 400 years. It then was united to the kingdom of Wessex, was devastated in 661 by the Mercians, and then annexed to Mercia; was re-united in 686 to Wessex ; was overrun in 787 and in 1001 by the Danes; appears to have for some time between these two dates been independent; and in the time of Edward the Elder became voluntarily a portion of the realm of England. William the Conqueror made it an independent lordship in favour of W. Fitz-Osborne; Henry I. transferred the lordship to Richard de Redvers, Earl of Devon; and Edward I. purchased it from that nobleman's descendant, Isabella de Fortibus, Countess of Albemarle. The lords exercised sovereign rights within it, and resided at Carisbrooke Castle. The title of King of Wight was conferred by Henry VI. on Henry Beauchamp, Earl of Warwick; but was only a sham and of short duration. Governors of the island were appointed under the Crown from the time of Edward I., but their power gradually diminished till the latter end of the 18th century, and became practically extinct in 1841. Nominal governors have since been appointed, but they wear their title merely as an honorary dignity. Ancient British and Saxon remains occur in the form of tumuli. Roman relics and two Roman villas have been found. The only noticeable ancient military strength is Carisbrooke Castle. The island comprises 93,343 acres; population, 78,672; but in the summer months the latter figures are nearly doubled owing to the enormous influx of visitors.

The Chapman code for Isle of Wight is IOW.
Chapman codes are used in genealogy as a short data code for administrative areas, such as county and country names.

The Historical Directories web site have a number of directories relating to Hampshire online, including:
Kelly's, Pigot, Slater, etc. 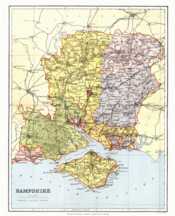