Bedfordshire or Beds, an inland county, bounded on the NW by Northampton, on the NE by Huntingdon, on the E by Cambridge, on the SE and S by Herts, and on the SW and W by Bucks. Its greatest length is 36 1/2 miles; its greatest breadth, 22 1/2 miles; its circuit, about 146 miles; and its area, according to the returns furnished by the Ordnance Survey Department, 298,494 acres. The general aspect is diversified and pleasing. The surface in the centre, called the Vale of Bedford, is prevailingly flat and luxuriant; in the SW hilly, a portion of the Chilterns, commanding extensive views; on the flanks of the Vale of Bedford and in the N, hillocky and rolling; and in other parts, a mixture of swells and flats. The chief rivers are the Ouse, the Ivel, the Hiz, the Ousel, and the Lea. The prevailing rocks in the S, up to Houghton-Regis and Barton-in-the-Clay, are chalk; those of a belt about 7 miles broad, east-north-eastward from Eaton-Bray and Leighton-Buzzard, are upper greensand and gault; those of a belt of similar but more irregular breadth immediately N of this, are lower greensand; those of the tracts farther N and NE, including most of the Vale of Bedford, are middle oolite, variously coral rag, calcareous grit, and Oxford clay; and those of a small tract along the Ouse N of Bedford, and of another small tract continuous with this in the extreme NW, are lower oolite, variously forest marble, Bradford clay, and fuller's earth. Chalk, under the name of clunch, is burnt for lime; freestone is found at Tottenhoe; a little ironstone is found; fuller's earth, of economical value, was formerly raised in Aspley-Guise; and a few grains of gold were once obtained at Pulloxhill. Mineral springs occur at Bedford, Bletsoe, Bromham, Clapham, Cranfield, Milton-Ernest, Odell, and Turvey. The climate is mild and genial.

The soil is very various and mixed, and occasions diversity of husbandry. A very thin soil lies on most of the chalk hills; a mixed sand prevails from Woburn to the vicinity of Biggleswade; a rich gravelly loam lies along much of the Ouse and the Ivel; and a clayey soil, often very fertile, prevails throughout the Vale of Bedford and the N.

The chief crops raised are wheat, barley, oats, beans, hay, and fruit. Large quantities of vegetables, butter, and cheese are sent to market. Round Biggleswade much of the land is devoted to pickle farming, and immense quantities of onions, cucumbers, cabbages, &c. are raised for pickling. Husbandry employs a larger proportion of the population than in almost any other tract of equal extant in England. Manufactures are confined chiefly to pillow-lace, straw-plait, straw bonnets and hats, bricks and tiles, pottery, and agricultural implements. There are some valuable coprolite diggings in the country, chiefly at Ampthill, Sandy, Shillington, and Sutton. The G.N.R. traverses the eastern district, northward from Hitchin through Biggleswade and Sandy, and it has a branch from Hatfieid by way of Luton to Dunstable, The M.R.'s main line from London enters the county by Luton, proceeding northward through Ampthill, Bedford, and Sharnbrook to Leicester. The L. & N.W.R. impinges on the county at Leighton-Buzzard, and sends off there a branch eastward to Luton, where it joins the G.N.R. It has another branch from Bletchford to Bedford, thence continuing to Cambridge.

The boundaries of the ancient or geographical county and those of the administrative county of Bedford are identical. The county is divided for parliamentary purposes into two divisions, and also includes the parliamentary borough of Bedford. The administrative county includes three municipal boroughs, has one court of quarter sessions, and is divided into seven petty sessional divisions. The boroughs of Bedford, Dunstable, and Luton have separate commissions of the peace, Bedford having in addition a separate court of quarter sessions. The county contains 133 entire civil parishes and parts of 2 others, and 125 ecclesiastical parishes or districts and parts of 6 others, most of which are in the diocese of Ely.

The magistracy of the county consists of the lord-lieutenant, about 20 deputy-lieutenants, and 100 magistrates. It is in the Eastern military district, and in the Norfolk judicial circuit. The assizes and quarter sessions are held at Bedford. The police force includes 97 men, exclusive of those of the boroughs. The only prison is the county jail at Bedford. By the Local Government Act of 1888 the county of Bedford became, for the purposes of that Act, an administrative county, governed by a county council consisting of chairman, aldermen, and councillors. The council consists at present of 17 aldermen and 51 councillors, the town of Bedford returning 6 members, Dunstable 2, and Luton 7, the other divisions of the county returning 36 members, or a total of 68. The county offices are at Bedford. Formerly Bedfordshire returned two members to Parliament for the undivided county, but by the Redistribution of Seats Act, 1885, It is now divided into two divisions, with one member for each. No. 1, the Northern or Biggleswade division (population, 64,457), comprises the sessional divisions of Bedford, Biggleswade, and Sharnbrook, and the parishes of Ampthill, Clophill, Cranfield, Hawnes, Houghton Conquest, Lidlington, Marston Moretaine, Maulden, and Millbrook in Ampthill sessional division, and the municipal borough of Bedford. No. 2, the Southern or Luton division (population, 68,224), comprises the sessional divisions of Leighton-Buzzard, Luton, and Woburn, and so much of the sessional division of Ampthill as is not comprised in division No. 1, and the municipal boroughs of Dunstable and Luton. The population of the county was (1801) 63,393, (1821) 84,052, (1841) 107,936, (1861) 135,287, (1881) 149,473, (1891) 160,704.

The territory now forming Bedfordshire was inhabited in the primitive times by the tribe called Cassii. It became part of the Roman Britannia Superior; afterwards part of the Britannia Prima, afterwards, in 310, part of the Flavia Cæsariensis. It belonged in the time of the Heptarchy to the kingdom of Mercia, and became subject in 827 to the Saxons. It first took the name of Bedford in the reign of Alfred the Great. Icknield Street crosses its southern extremity eastward over the chalk hills. Watling Street crosses its south-western extremity north-westward through Dunstable and near Battlesdon. A Roman road, coming in from Baldock, traverses the eastern extremity to Potton. British, Roman, Saxon, and Danish remains occur near Dunstable, near Sandy, near Hexton, at the Maiden Bower, at Tottenhoe, Arlsey, Biggleswade, Bradford, and other places. Earthworks, ruins, or other vestiges of ancient castles may he seen at Bedford, Risinghoe, Cainhoe, BIetsoe, Ridgmont, Meppershall, Puddington, and Thurleigh. An old cross stands at Leighton-Buzzard; a famous priory stood at Dunstable; fourteen other monastic houses stood in other places; and some of the old existing churches, particularly those of Luton, Elstow, Eaton-Bray, Felmersham, and Puddington, exhibit interesting features of ancient architecture.

The Chapman code for Bedfordshire is BDF.
Chapman codes are used in genealogy as a short data code for administrative areas, such as county and country names.

We have transcribed the entry for Bedfordshire from the following:

A listing of the Hundreds and Liberties in Bedfordshire, with the parishes contained in them.

The Return of Owners of Land in 1873 for Bedfordshire is available to browse.

Old map of Bedfordshire circa 1895 (Gazetteer of England and Wales)

A listing of the Poor Law Unions in Bedfordshire, with the parishes contained in them. 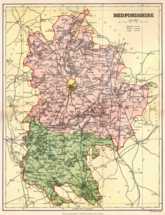